"Gintama Rumble" Commercial Shows a Few of the Playable Characters

Action game launches in Japan and Southeast Asia on January 18, 2018 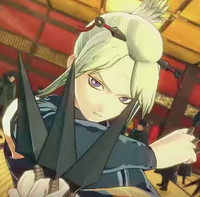 The latest preview of Gintama Rumble may be short and to the point—it's just a commercial, after all—but it does manage to squeeze in some of the recently-revealed playable characters and additional costumes. Check out a quick glimpse of Tsukuyo and Kamui in action, as well as Kagura's Yato Awakened look and boss characters Abuto and Housen below.