"Xenoblade Chronicles 2" Gets Its Own Nintendo Direct Next Week 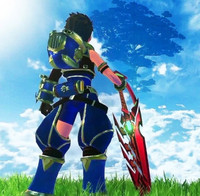 Monolith Soft's Xenoblade Chronicles 2 is the first major RPG for Nintendo Switch, and it's due out in a little under a month. That makes it a prime topic for its own Nintendo Direct presentation, which is scheduled to stream live on November 7 at 6:00am Pacific Time.

You'll be able to catch the North American stream here:

Europe and Japan's streams are here and here, respectively.