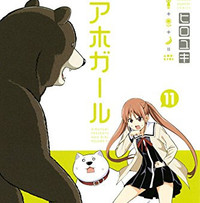 Author Hioyuki has announced plans to end Aho-Girl, the 2012 comedy manga that inspired the summer 2017 anime, in the January issue of Bessatsu Shonen Magazine, out next month.

Volume 11 is due in Japan on November 9th.

The series is released in North America by Kodansha Comics, who described it

Equal parts cute, silly, and subversive, the four-panel comedy manga Ahogaru was a surprise hit in Japan. Fans of anarchic slice-of-life gag manga like Azumanga Daioh – these are the new laughs you’ve been waiting for! Yoshiko is a hopefully clueless high school girl. Her rock-paper-scissors strategy is "rock." She somehow gets zeroes on multiple-choice tests. And she has an often-nearly-fatal weakness for bananas. Her devoted friends have no choice but to hang around and make sure nobody takes advantage of her. (Of course, the entertainment value might have something to do with it, too.) Cute characters, weird gags, and lots and lots of bananas!