Ichika VA: "I have wanted to leave a nail mark in the long history of PreCure, and we did it!" 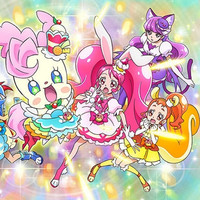 According to the box office report for the weekend of November 4-5, the last weekend's top ticket-selling film "Eiga Kirakira PreCure a la Mode: Paritto! Omoide no Mille-feuille" (Kirakira PreCure a la Mode The Movie: Paris and The Memorable Mille-feuille), dropped to fourth in its second weekend, but its total gross had already surpassed an impressive 450 million yen.

Thanks to the huge opening, the anime's main voice actresses (with their PreCure characters) and 32-year-old kabuki actor Onoe Matsuya II, who voiced a guest character for the film Jean-Pierre Zylberstein, joined a special stage event at the Shinjuku Wald 9 theater in Tokyo on Thursday.

Karen Miyama, the VA of the protagonist Ichika Usami/Cure Whip said, "Since this series started, I have kept saying, 'I want to leave a nail mark in the long history of PreCure.' I think we did it! This would not have been possible without everybody's support." Watch the video reports of the event

provided by MAiDiGi TV below.

Meanwhile, Fate/stay night [Heaven's Feel] THE MOVIE I. presage flower, the first chapter of the trilogy

9th in its 4th weekend, bringing its total cume in Japan to 1.1 billion yen.