Makoto Shinkai: "I'm Not Much Interested in Hollywood's 'Your Name.' Live-Action Remake." 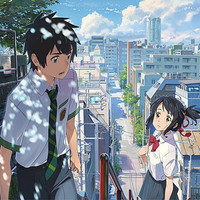 Today on November 10, one day ahead of the opening of "Exhibition of Shinkai Makoto" at the National Art Center, Tokyo, 44-year-old Makoto Shinkai, the director of Kimi no Na wa./Your Name., joined a private view of the exhibition for the press, alongside 24-year-old actor Ryunosuke Kamiki, who voiced the male protagonist of the film, Taki Tachibana.

In addition to praising the exhbition dedicated to his art works for 15 years, from Hoshi no Koe/Voices of a Distant Star (2002) to the most recent Your Name., he expressed his thoughts on the upcoming live-action remake of Your Name. by Hollywood studios.

The live-action remake project based on the second highest-grossing Japanese film ever was revealed in September of this year. Paramount Pictures and Bad Robot have joined to produce the adaptation. J.J. Abrams (Star Wars: The Force Awakens) serves as producer, Eric Heisserer (Arrival)

is attached to write a screenplay.

According to Oricon News, Shinkai honestly said, "People often compare their creation to their child, but

I'm not much interested in how my child would be treated. There was an announcement that a Hollywood

version will be made. While I'm looking forward to how it will go, I also think how it will grow is up to himself

(the Hollywood version itself) because it has already left my hand."

He then added, "I've seen this exhibition keeping such a distance. Rather than whose arts they are, I felt

it was very fresh as an art exhibition."

"Exhibition of Shinkai Makoto" will be running at the National Art Center, Tokyo, from November 11 to