Bet you thought this day would never come 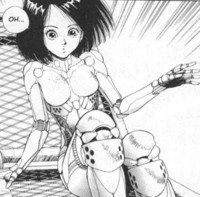 Bet you thought this day would never come. For decades, live-action manga adaptation Alita: Battle Angel seemed like James Cameron's next-project, to be made after the Dark Angel TV series or the Avatar sequels. Now, it's finally coming and a teaser is offering a look at its take on the iconic beginning of the Yukito Kishiro sci-fi action manga.

Rosa Salazar is playing the title character, and Christoph Waltz, Mahershala Ali and Ed Skrein are among the other cast members.

Hollywood Reporter has described the film, eyed by Fox for Summer 2018:

Set in the 26th century, Alita tells of a female cyborg (Salazar) that is discovered in a scrapyard by a scientist. With no memory of her previous life except her deadly martial-arts training, the woman becomes a bounty hunter, tracking down criminals. The action-adventure story is meant to serve as a backdrop to themes of self-discovery and the search for love.

The Most Popular Anime in 2020…According to Wikipedia