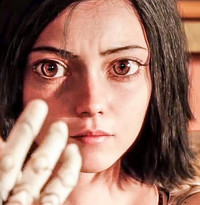 "It was always Jim's intention to create a photo-realistic version of the manga eyes that we're so accustomed to seeing. We really wanted to honour that tradition and see that look standing next to any human character. To have the right person to emote behind it was really essential. Her origins are in the film and you understand why she looks that way. If the eyes are the windows to the soul, we have some pretty big windows. You can see a lot going on in there! When it gets to the emotional scenes it's really uncanny and striking. And captivating!"

Translator/scholar Rachel Matt Thorn has a must-read thread about the subject (and related commentary) on Twitter. The thread also includes the origin of the name "Alita" - (the character Gally in the original Japanese and the series is Gunm - as in Gun Dream. It starts with...

Gee, this would be really informative if it was true. Illustrator NAKAHARA Jun’ichi was doing huge eyes when Tezuka was in diapers. https://t.co/X9EJKcoJ69

Also, of note: Nobuteru Yuki, character designer on the Alita OVA, reacted to the trailer... mostly to share the speculation that Cameron's lengthy hold on rights were why the anime has been unavailable for so long. He did also smirk about the eye-size when one of the responses brought up the subject (also suggesting that Rosa Salazar deserves some of the credit).