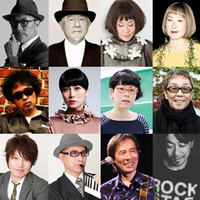 The official Japanese website for the Osomatsu-san/Mr. Osomatsu TV anime series announced today that its ongoing second season's second ED song "Otona ÷6 × Kodomo × 6" is performed by "The Osomatsu-sans with the Matsuno Six Brothers," consisting of 16 Japanese artists and the six voice actors of the Matsuno brothers. 65-year-old acclaimed singer/drummer Yukihiro Takahashi served as composer/producer and joined the recording as one of the singers. Takahashi is well known for his activities in internationally famous Japanese techno unit YMO (Yellow Magic Orchestra), and other two members of the unit, Haruomi Hosono and Ryuichi Sakamoto also joined the session.

Originally, "The Osomatsu-sans" was a special unit formed just for one day in the outdoor summer music festival "World Happiness" in 2013, for which Takahashi has served as curator since its first event in 2008. "Otona ÷6 × Kodomo × 6" is the unit's first original song written by Keiichi Suzuki (Moon

Riders) and composed/produced by Takahashi. As with the second season's first ED song "Let' Go!

to sing the chorus part. The new ED song will be revealed in the first episode in 2018 to be aired on

January 8, and its CD single will be released on February 28.