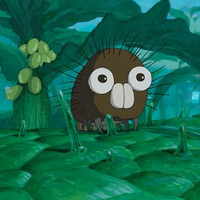 The official website for Ghibli Museum in Mitaka, Tokyo, announced today on January 9 that Hayao Miyazaki's new short film Kemushi no Boro/Boro the Caterpillar was completed and that the 14-minute 20-second film would be screened at its Doseiza (Saturn) Theater from March 21. This is the 10th original anime short film produced for exclusive screenings at the 80-seat theater. Tickets for the March screenings will go on sale on February 10.

After finished directing his 11th feature film Kaze Tachinu/The Wind Rises, Miyazaki has been attached with Kemushi no Boro since the summer of 2015. Back in December 2016, Studio Ghibli producer Toshio Suzuki said that the short was scheduled to be completed by the spring of 2017. But it has been postponed probably due to Miyazaki's next feature film Kimitachi wa Dou Ikiruka.

Just before dawn, Boro the Caterpillar hatched from an egg among patches of scrub grass. Looking

around for the first time, he noticed the brilliance of the morning sun and a deliciousness in the air.

Boro lowered himself down to the ground from the borogiku (groundsel), and stepped out into the