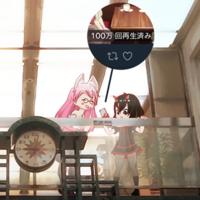 Former "Kemono Friends" director Tatsuki posted his new 115-second original short anime "Hentatsu (preliminary version)" on his official Twitter on January 31. As a proof of his royal fans' continuous support, the clip has been already viewed over one million times in just five days. He soon posted another new art featuring the two yet-named original characters to show his appreciation to the fans. In the art set obviously near Nakano Broadway, the two are looking on the smartphone's screen and are happy with the one million view sign attached with the clip.

Meanwhile, Amazon Japan has still stopped accepting pre-orders for the five-minute DVD of his previous

original short anime "Keifuku-san." The disc was originally planned to be released today in Japan. The online

store started accepting pre-orders for the disc on January 31, but had to stop it due to far more orders

than expected just in five days. The disc is now set to be released on February 19, two weeks later than