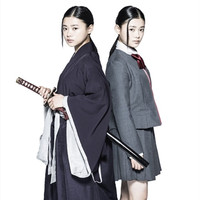 Following 24-year-old Sota Fukushi (Gentaro Kisaragi in Kamen Rider Fourze) as Ichigo Kurosaki, the official website for the upcoming live-action film adaptation of Tite Kubo's Bleach action manga today also revealed a visual of its female protagonist Rukia Kuchiki portrayed by 20-year-old Hana Sugisaki (Rin Asano in Blade of the Immortal, Mary in Mary and the Witch's Flower). The two previously co-starred in the 2014 film In The Hero and the 2016 TV drama Montage.

Sugisaki says, "In order to play Rukia, who is a powerful and pure Soul Reaper, I read the original manga over and over again and also watched the anime. I examined Rukia in my own way to prepare for the character. Since I have already worked with Fukushi-san in some other films, I felt relieved from the first day of the shooting. While Ichigo and Rukia are human and death characters in this story, I thought they have hearts, after reading through the screenplay. I fell in love with them whose existences are supporting each other and becoming stronger. I think I was able to feel that

way because Fukushi-san was with me. I believe the friendship between the two that I actually felt

at the sets will surely reach the hearts of this film's audience."

The live-action film Bleach directed by Shinsuke Sato (GANTZ, I Am a Hero) was announced in August 2016

has needed a lot of post production works). Warner Brothers Japan confirms that it will be released in Japan

on July 20, 2018. The story of the adaptation is based on the "Substitute Shinigami" arc told in the manga's