Interact with characters from the series until March 27 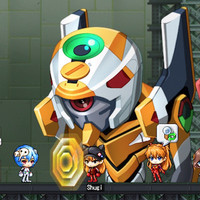 If you play Maple Story and you're a fan of Neon Genesis Evangelion, you're in for a treat later this month. The side-scrolling MMORPG is getting ready for a crossover with the Evangelion movies, with the event set to run from February 28 to March 27.

Maple Story players will find the EVA pilots—including Shinji, Rei, and Asuka—lost in Maple World, and it's up to you to lend them a helping hand. Completing daily quests will help them become more familiar with their surroundings, but you'll also have to fend off waves of invading Angels. The EVA Coins you earn along the way can be spent on limited-time items.

NEXON highlights some of the other features:

● Evangelion Coin Shop – After completing Evangelion-themed events and quests, players will earn EVA Coins to trade in for limited-time items including chairs, medals and even permanent equips;

● Evangelion Style Boxes – For a limited time, players can purchase special surprise boxes with accessories and outfits to dress up their MapleStory character in Evangelion style;

● Exclusive Items – Players can also purchase special random boxes and open them up to find Evangelion-themed items including androids, as well as purchase hair coupons designed to look just like characters from Evangelion.