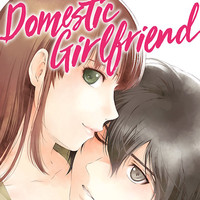 Crunchyroll Manga is preparing to add another Kodansha series to its manga simulpub lineup. The latest addition is Kei Sasuga's Domestic Girlfriend, which will be available to members worldwide (except for Japan) starting on June 1 at 5:00pm Pacific Time.

The latest uncollected chapters—which includes those that have not been collected in a complete volume—will be available when Domestic Girlfriend launches. The simulpub officially begins when the next chapter of the Weekly Shonen Magazine series hits Crunchyroll Manga on June 5.

High schooler Natsuo is hopelessly in love with his cheerful and popular teacher, Hina. However, one day at a mixer, he meets a moody girl by the name of Rui and ends up sleeping with her. Soon after, his father announces that he's getting remarried to a woman with two daughters of her own. And who shows up in tow, other than both Hina and Rui?! Natsuo's outrageous new life starts now!

All users will be able to preview chapter 1, and all catalog eBook volumes are available to purchase in download-to-own form in the Crunchyroll App's Manga Shop (Android version).