"I plan to finish it properly in the end, before I die." 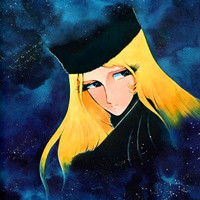 At the press conference for the live-action drama based on his Galaxy Express 999 sci-fi adventure manga series held in Tokyo yesterday, 80-year-old manga artist Leiji Matsumoto confirmed that he has started drawing a new story of the manga.

When one reporer asked him if he wanted to create 999's new story, prequel, spin-off, or anything (in the beginning of the video 3 below), Matsumoto answered, "I have already started drawing a new story. It has reached the point that the characters arrive the entrance of Black Hole Tunnel. Then the story will go beyond time, we don't know where they will go, the past or future. I have finished drawing that much." He also said, "I plan to finish it properly in the end, before I die. But I also feel like everything in my life will be ended at the same time 999 ends, so I don't want to draw it yet."

ANNIVERSARY Chronicle" released in February 2018. The 32-page episode tells "the beginning of the

never-ending journey" of Tetsuro and Maetel, who board Galaxy Express 999 to seek the mysterious

"Dark Tunnel" appears in the galaxy.

the male protagonist Tetsuro Hoshino, was live-broadcast on BS Sky PerfecTV! at 20:00 on June 18 (JST).