Darius Cozmic Collection Brings a Bunch of Shmups to Switch 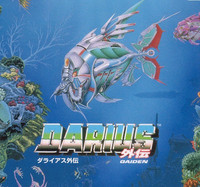 Taito has a slew of classic shmups on the way in one handy package for Nintendo Switch. The Darius series is coming to Nintendo's console in the Darius Cozmic Collection, which includes four games in the standard version and nine in the special edition. The set is due out in Japan on February 28, 2019.

The standard version will set shoot 'em up fans back ¥5,200 (about $47), and the limited run special edition will be priced at ¥16,800 ($152). The former has four arcade games, and the latter adds in five console entries. Both versions will include arcade versions of Darius, Darius II, Sagaia, and Darius Gaiden. Here are the five extra games exclusive to the special edition.

Those who pick up the special edition will also get an arrange CD, official materials book, and miniature acrylic marquee.