Shinsuke Sato (GANTZ, I Am a Hero)-directed film will open in Japan next Friday 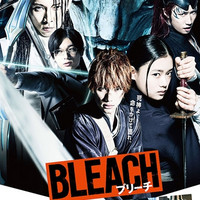 Just one week before the live-action film's theatrical release in Japan, Bleach manga author Tite Kubo posted his comments on it on his official Twitter account today.

To tell the truth, I have not been involved in this live-action film so much for two reasons.

First, I had a feeling that I wanted to see which part of the original manga director Sato decided to

use and omit as a live-action film.

And second, I was just in the middle of making the climax story of the manga serialization when I was

informed of the film project, so I was not able to afford the time to take part in the film fully.

Instead, I was allowed to offer only two requests:

1. Don’t change the distance and relationships among the characters from the original manga.

2. Don’t make contradictions in the characters’ emotions and action.

As a result, I think they made a good quality film.

In order to make it simple as a film, the film drops advance hints differently, so there are, of course,

many things that are different from the manga, but many battles are connected smoothly and are

mixed together with the story.

The film’s speedy and large-scale action reach a new level as a Japanese film.

Honestly, I had said, "I will not write any comments if I don’t like it," until I saw the completed film.

I'm glad that I can write my comments.

Please go to the theater to check how the film looks.

Shinsuke Sato (GANTZ, Death Note Light up the NEW world)-directed film will be released in Japan

"You can learn about the world of 'Bleach' in one minute"