2020 Olympic and Paralympic Games Mascots Have Their Official Names, MIRAITOWA and SOMEITY

Shoko Nakagawa: "I think they are wonderful names that fit with these mascots." 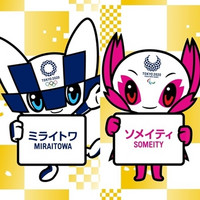 The comittee explains the reason for selection of their names as below:

The Tokyo 2020 Olympic mascot's name was revealed as Miraitowa (pronounced mee-rah-e-toh-wa), based

on the Japanese words mirai (future) and towa (eternity) combined. This name was chosen to promote a future

full of eternal hope in the hearts of people all over the world.

The Tokyo 2020 Paralympic mascot's name was revealed as Someity, (pronounced soh-may-tee) which comes

from someiyoshino, a popular cherry blossom variety, and additionally echoes the English phrase “so mighty”.

Paralympic athletes who overcome obstacles and redefine the boundaries of what is possible.

The designs of the two mascots were chosen from the six candidates by the votes of 205,755 classrooms

From 162,042 submissions, the six candidates were picked by the 14 members of the Mascot Selection

Examination Council, including 33-year-old otaku idol Shoko Nakagawa, aka Shokotan. Soon after the

announcement for the two's official names, she released her comment via her agency:

"MIRAITOWA and SOMEITY, they are neat, cute, cool, and unique to Japan. I think they are wonderful

names that fit with these mascots. I hope their names will be loved by the children in the whole world

and will remain in the history forever. Watching their birth from zero as a member of the council has

become a very important experience in my life. I will keep thinking about what I can do to support