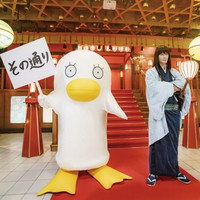 Even in its third weekend of release, Gintama 2: Okite wa Yaburu tame ni koso Aru (The Rule is surely there to be broken), the second live-action film based on Hideaki Sorachi's manga series, was still doing a steady business. The Shun Oguri-starring comedy earned a satisfactory 308 million yen on 256,000 admission in the weekend of September 1-2, keeping the second position in the weekend top 10.

By the last weekend of Japan's summer holiday period, Gintama 2 had made 2.4 billion yen from the 1.88 million ticket sales, which was 100 million yen more than the first film's first three-week gross. If the sequel can keep up its strong pace for a few more weeks, it could surpass the first's total box office record of 3.84 billion yen and increase a possibility for the third one. However, Japan's summer holiday period has already ended. Considering the fact that the film's main audience is young generation, mainly students, it may be difficult to expect the same pace as the first that was

released in the middle of July last year?

This weekend's new wide-released anime film, Studio Voln-animated I Want to Eat Your Pancreas, based

and 10th in its second, The Seven Deadly Sins the Movie: Prisoners of the Sky, an all-new anime feature

film adaptation of Nakaba Suzuki's fantasy action manga, quickly disappeared from the top 10 in its third