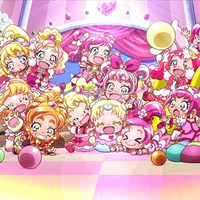 While ranking third in its second weekend, the 73-minute film featuring the record-breaking 55 PreCure girls has earned 650 million yen from its first two-week run. Checking the PreCure franchise's 15-year history, its most successful film was PreCure All Stars DX2: Light of Hope☆Protect the Rainbow Jewel! that was released in March 2010 and earned 602 million yen by its second weekend. So if All Stars Memories can keep up its strong pace for a few more weeks, it would be highly possible to crack the franchise's box office record of 1.15 billion yen marked by All Stars DX2.