#RedrawReigen is BACK, and the World is Just a Little Brighter for It 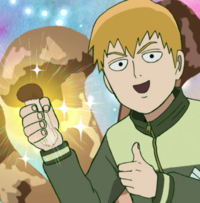 Two and a half years ago, Studio Bones’ critical and fan darling Mob Psycho 100 changed everything. No, not for its once-in-a-generation opening sequence, nor was it for the anime’s unbelievable animation or its earnest and lovable cast of characters. In September 2016, Twitter user @DoonaDraws accidentally kicked off one of the best memes many of us have had the pleasure of experiencing: #RedrawReigen.

Let me explain: Reigen, the less-than-scrupulous psychic and mentor to Mob Psycho 100 protagonist Shigeo “Mob” Kageyama, is always getting himself into trouble and bizarre situations. He’s almost always a joke, even if he’s somehow never at the butt of one - at least, not in his own universe. When @DoonaDraws decided to draw the lovable grifter in the style of a popular stock photo as seen below, something clicked. This made sense. With this hashtag, Reigen revealed himself to be a chameleon, someone who somehow “made sense” as the key actor all of the ridiculous stock photos and memes of the Internet. It was perfect.

I just remembered the best picture and had to do another #RedrawReigen pic.twitter.com/rCdBrHkXtX

Within just 24 hours of the initial tweet, the hashtag was trending, and even Mob Psycho 100’s original author had stumbled upon it and shared his excitement. It was incredible.

Now, a little more than two years later, Mob Psycho 100 has returned for a second season. And with that, well, things are finally good again:

the mood when you see #RedrawReigen coming back to life pic.twitter.com/rkzfcHx9IO

so I hear the meme of memes is back #redrawreigen pic.twitter.com/eCXGtFEEXb

we are bringing #RedrawReigen back for season 2 right ok yes good pic.twitter.com/vO3iRuPwFv

Attention, all you Mob Psycho Gamers! Shigeo Kageyama is in great danger, and he needs your help to score a date with his middle school crush, Takane Tsubomi! To do this, he needs a bit of weight lifting training, and to become the next class president-- #RedrawReigen pic.twitter.com/vcI8fyv3a3

You can't be a conman if you don't know how to think outside the box#RedrawReigen #mp100 pic.twitter.com/GG79vIamGX

My contribution to the #RedrawReigen this time around since I didn’t participate last time pic.twitter.com/4h4ZXKSkiK

Thank you, Reigen. Thank you, artists of Twitter. We owe you all the world.