Snorlax Does What It Does Best in New Detective Pikachu Trailer 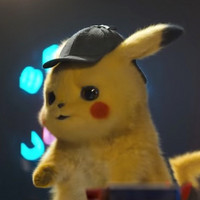 Shortly after Ryan Reynolds went all meta about making Detective Pikachu, a new trailer hit the Internet. While there are a ton of moments and 'Mon worth spotlighting, it's hard to ignore one particularly portly snoozer near the beginning. Watch for Snorlax and a bunch of other first-time appearances in the second full trailer below.

If you missed Ryan Reynolds' video:

Detective Pikachu opens on May 10.