Analog vinyl edition including "Seikan Hikou" will be also available 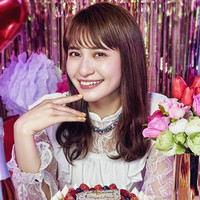 The official website for 29-year-old voice actress/singer Megumi Nakajima has posted a 90-second music video for "Love! For Your Love!," a newly-recorded song from her first best album "30 pieces of love" to be released in Japan on June 5, 2019, her 30th birthday. The anniversary song is produced by Katsutoshi Kitagawa, who previously worked on her fourth single "Melody" (OVA Tamayura ED) in 2010.

Nakajima made her professional voice actress/singer debut as Ranka Lee in Macross Frontier in 2008, and has released 12 singles and four original albums as a solo singer herself. In addition to "Love! For Your Love!," her first best album will include select 29 songs that were released in her 11-year career.

The album will be released in two CD editions: 3,500-yen regular edition and 5,500-yen first press

limited edition with a bonus Blu-ray, as well as 3,000-yen analog vinyl edition "8 pieces of love."

One of her most popular songs, "Seikan Hikou" that she sang for Macross Frontier as Ranka, will be

included only in the eight-song vinyl.

"Love! For Your Love!" short MV