Netflix Ignites the Spark for Magic: The Gathering Anime from Avengers: Endgame Directors 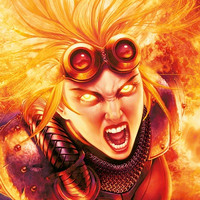 Some hot news for all you would-be Planeswalkers out there: Netflix is teaming up with Habro's Allspark Animation and executive producers Joe and Anthony Russo (Avengers: Endgame) to create an original animated series based on Wizards of the Coast's medium-defining collectable card game, Magic: The Gathering.

Aside from the teaser visual above featuring the fiery Planeswalker Chandra Nalaar, a few other details have been revealed about the upcoming production. The series will feature an all-new storyline focusing on the iconic Planewalkers "as they contend with stakes larger than any one world can hold". The main staff for the production includes:

The War of the Spark trailer (above) has already demonstrated that animation is a good medium for exploring the stories of the Magic: The Gathering multiverse. I really, really, really hope they don't feel the need to drag Nicol Bolas's scaly butt out of banishment for this one. I'm so sick of that maniacal elder dragon. I'd much rather see some version of the Gatewatch and Eldrazzi scenarios.

Magic: The Gathering Arena Lays On the Nostalgia in Japanese Ad