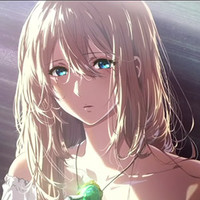 Violet Evergarden The Movie will be helmed by series director Taichi Ishidate with the character designs and chief animation direction being Akiko Takase. No release date is now set for it.

Violet Evergarden: Spin-Off - Eternity and Auto Memory Doll - a spin-off film, was released on September 6 in a limited three week season in 73 theaters across Japan. The spin-off was helmed by Haruka Fujita and credited all the staff that worked on the film, rather than just those who have been at Kyoto Animation for over a year.