The Disastrous Life of Saiki K. to Return as Web Anime on Netflix in Winter 2020 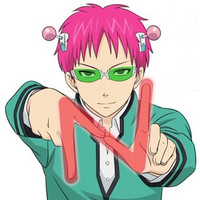 With a teaser visual featuring its protagonist saying "This is not N for Nendo," Netflix Japan announced today that a new anime series based on Shuichi Asou's The Disastrous Life of Saiki K. comedy manga, titled "Chapter: Ψ Shidou" (literally means Chapter: Restart) is set to be streamed worldwide in the winter of 2020.

In addition, two new voice cast are confirmed to join: Kosuke Toriumi (Nozel Silva in Black Cover) as Takumi Iguchi and Nao Toyama (Chitoge Kirisaki in Nisekoi) as Hii Suzumiya. Iguchi is a serious, hot-blooded teacher who is mistaken as a pervert because of his filthy face. Suzumiya always has a stroke of bad luck, but takes them as her own mistakes.

The first season of the GG FIRM×J.C.STAFF-animated TV anime adaptation of the manga was aired for 24 episodes from July to December 2016, and its second season followed with another 24 episodes from January to June 2018. Then its "final chapter" based on the manga's last episode about the main characters' trip to Oshimai-city (oshimai literally means "the end" in Japanese), was aired on TV Tokyo and its affiliates on December 28, 2018.