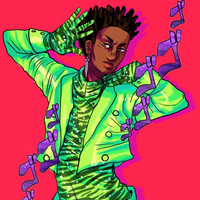 The 2019 American Music Awards were held on Sunday night and while the mainstream is focused on Taylor Swift taking the crown for most awards from Michael Jackson, anime Twitter found something a lot more interesting to talk about, and it centered around Lil Nas X and the unique wardrobe he wore to the ceremony.

From the time that Variety posted the above tweet to the time that this article was posted, the majority of replies centered on his wardrobe and instant comparisons to the fashion design in JoJo's Bizarre Adventure were made, to the point that later on in the evening, Lil Nas X posted this in response to the conversation:

I think it's safe to say that he's taking the comparison in stride.

Headline image taken from fanart by aerialphobia on Instagram

Tags
jojos bizarre adventure, lil nas x
« Previous Post
Crunchyroll Editorial's Top 100 Anime of the Decade: 100-26
Next Post »
QUIZ: What Anime Gifts Should You Be Shopping For?
Other Top News
2 Comments
Sort by: