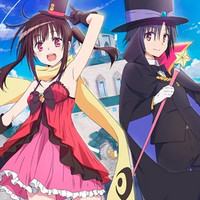 The official website for the long-awaited TV anime adaptation of the late Tomohiro Matsu (Listen to Me, Girls. I Am Your Father!)'s unfinished romantic comedy light novel series Hatena☆Illusion announced today that it is set to premiere on BS Nittele and MBS on January 9, 2020, then on Tokyo MX one day later.

Prior to the TV premiere, an advance screening event for its first episode is scheduled to be held at Space FS Shiodome in Tokyo at 19:00 on December 22, 2019. The anime 's four main voice cast: Aina Suzuki (Kana "Hatena" Hoshisato), Yoshitsugu Matsuoka (Makoto Shiranui), Miyu Tomita (Yumemi Hoshisato), and M.A.O (Ema Sakurai) will also join for a talk show. Its 3,500-yen ticket will be available between December 13 and 15 on ePlus.