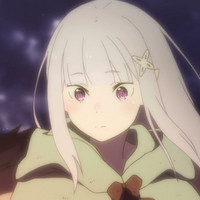 To commemorate its box office success, a six-minute special digest clip from the Re:ZERO anime franchise's second OVA episode Re:ZERO -Starting Life in Another World- The Frozen Bond featuring its theme song "Yuki no Hate ni Kimi no Na wo" (Your name at the end of the snow) performed by female singer nonoc is now streamed on KADOKAWA's official YouTube channel.

nonoc was born in Hokkaido and made her professional singer debut with the image song "Relive" and the ED theme song "White White Snow" for the first OVA Memory Snow in October 2018. The CD/digital release of "Yuki no Hate ni Kimi no Na wo" has not yet been set.

The 80-minute prequel episode focusing on the first encounter between Emilia and her magical spirit Puck was released in 79 theaters across Japan on November 8 and ranked sixth in its opening weekend box office. From its six-week theatrical run, it has earned 250 million yen.