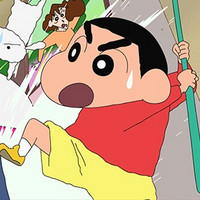 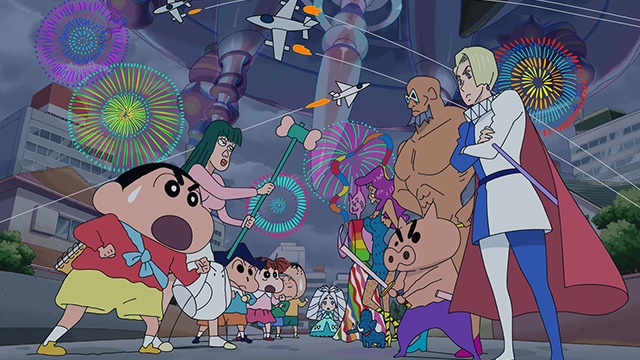 Crayon Shin-chan: Crash! Rakuga Kingdom and Almost Four Heroes was released in 364 theaters in Japan on September 11, 2020. The 28th Crayon Shin-chan film was originally slated for April 24 but had been postponed due to the COVID-19 pandemic. It has become the first film released in fall in the anime franchise.

The 103-minute film earned 262 million yen on 212,000 admissions in its first Saturday and Sunday, 289 million yen in its first three days from Friday through Sunday, to become the top-grossing film of the weekend as expected. Its first three-day gross was 96.3 percent of that of the previous 27th film Honeymoon Hurricane 〜The Lost Hiroshi〜 released in April 2019.

The film was directed by Takahiko Kyogoku, best known for his works for the Love Live! franchise and the Prism Show segments in the Pretty Rhythm franchise and its spin-off KING OF PRISM series. He joined the film by the offer from Shin-Ei Animation producer Keiichi Kondo. To learn the Crayon Shin-chan franchise's worldview, he directed a few episodes of the Crayon shin-chan TV anime in 2018 alongside the preparation for the film.

Meanwhile, the live-action feature film adaptation of Hiroyuki Nishimori's school thug-themed comedy manga Kyo Kara Ore Wa!! had finally crossed the five billion yen mark with the 3.9 million ticket sales in its 56th day of reelease. It has already become the top-grossing film at the Japanese box office of this year so far, surpassing Bong Joon-ho's Oscar-winning live-action film Parasite. It has also become the director Yuichi Fukuda's most successful film in his career by breaking the box office records of his two Gintama live-action films in 2015 (3.84 billion yen) and 2017 (3.7 billion yen).