6,500-limited production items will be available in Japan and overseas from December 11 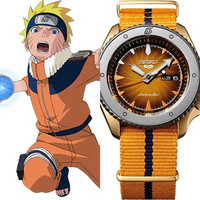 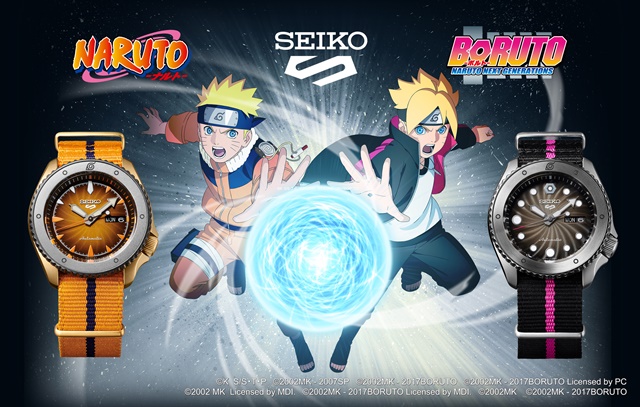 Seiko Watch Corporation has announced the release of seven new models from its casual watch brand "SEIKO 5 SPORT," which are inspired by the main characters from the popular Japanese TV anime series NARUTO and BORUTO: NARUTO NEXT GENERATIONS.

Each of these special collaboration items will be produced only in 6,500 pieces. The suggested retail price in Japan is 53,900 yen (including tax / about 510 US dollars), and they will be available in Japan and overseas from December 11, 2020.

This watch's design evokes Naruto's iconic Ninja outfit, and the worn-like bezel and case reflect the tough training required to become a Hokage, a title bestowed on the leader of the Hidden Leaf Village where Naruto belongs. The bezel ring plate is designed after his forehead protector which is engraved with the symbol of his village. His iconic Jutsu (Ninja technique) "Rasengan" inspires the spiral pattern of the dial. The nine orange indexes hint at the Nine-Tails sealed in himself while the 12 o'clock position index represents the pendant he inherited from Tsunade, a senior Hokage of his village. The Uzumaki Clan's Kamon, or Japanese emblem used to decorate and identify an individual, family, or institution, is printed on the case back. 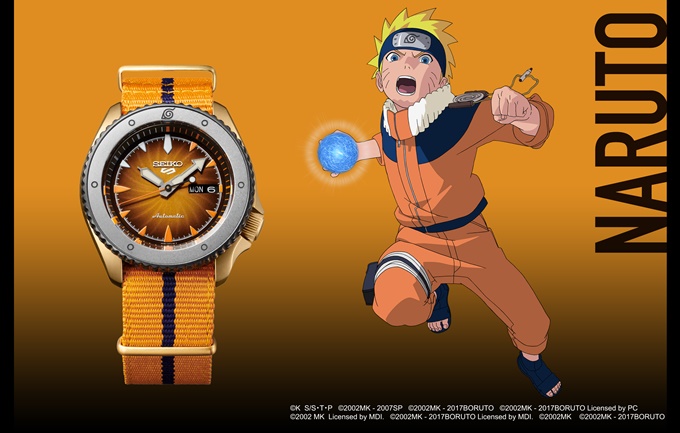 Naruto's friend and rival, Sasuke is captured in every detail of this blue dialed watch. His trademark Jutsu "Chidori" is reflected in the dial pattern, in which the Jutsu's hand sign is discretely highlighted on the one, three and eight o' clock positions. The horizontal line on the Hidden Leaf Village symbol on the bezel represents the scar marked on his forehead protector by Naruto, and the watch crown is engraved the Clan's unique "Sharingan" sign. On the case back is printed the Uchiha Clan's Kamon.

Shikamaru's "Shadow Possession Jutsu" is perfectly reflected in the dial of this watch. The Black color scheme with green accents and the mesh-like dial ring are consistent with the character's attire. The indexes are designed in the shape of his favorite Shogi game pieces, and the case back carries the Nara Clan's Kamon.

The color combination is reminiscent of Lee's trademark jumpsuit and leg warmers. The bezel reflects on one side the bandages of his arms and thigh, and on the other, the "The Eight Inner Gates," of which Lee had managed to open up to the fifth gate to obtain the extraordinary "Hidden Lotus". On the case back are the kanji characters meaning "Guts" as found on his heavy ankle weights. 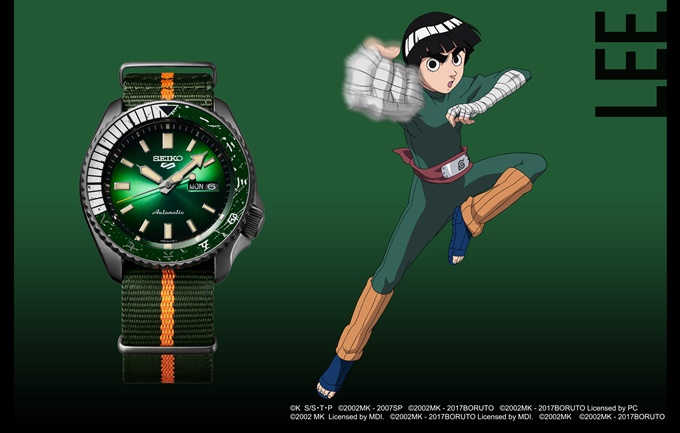 The brown case and the pressed pattern of the dial are inspired by sand, and the kanji character for "love" at the one o'clock position brings Gaara and the One-Tailed sealed inside him to life. The pattern inspired by the mark on his gourd is seen on both the dial ring and case back. 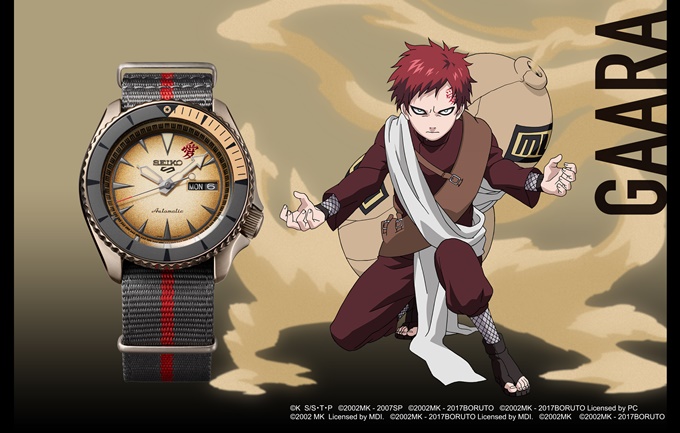 Inheriting his father Naruto's Jutsu "Rasengan", the dial has the same spiral pattern in black. The color of his costume is reflected in the vivid pink color accents on the strap and seconds hand. The 12 o'clock index is inspired by a bolt as seen in the animation's logo. The Uzumaki Clan's Kamon is printed on the case back.

The "Fire Style: Fire Ball Jutsu" Sarada inherited from her father Sasuke, is expressed in the red gradation dial. The single Tomoe mark on the 5 o'clock position indicates she is still a young Ninja in training in pursuit of improving her "Sharingan". The two-tone bezel is symbolic of how she has inherited both her father Sasuke and her mother Sakura's characteristics as a Ninja. The Uchiha Clan's Kamon is printed on both the bezel and the case back. 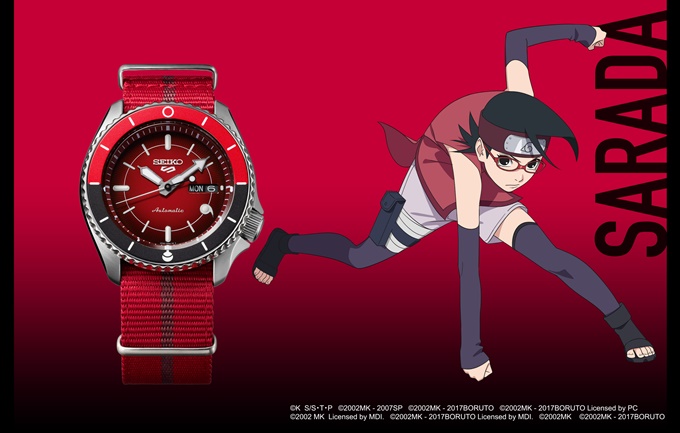