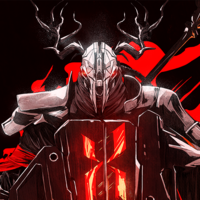 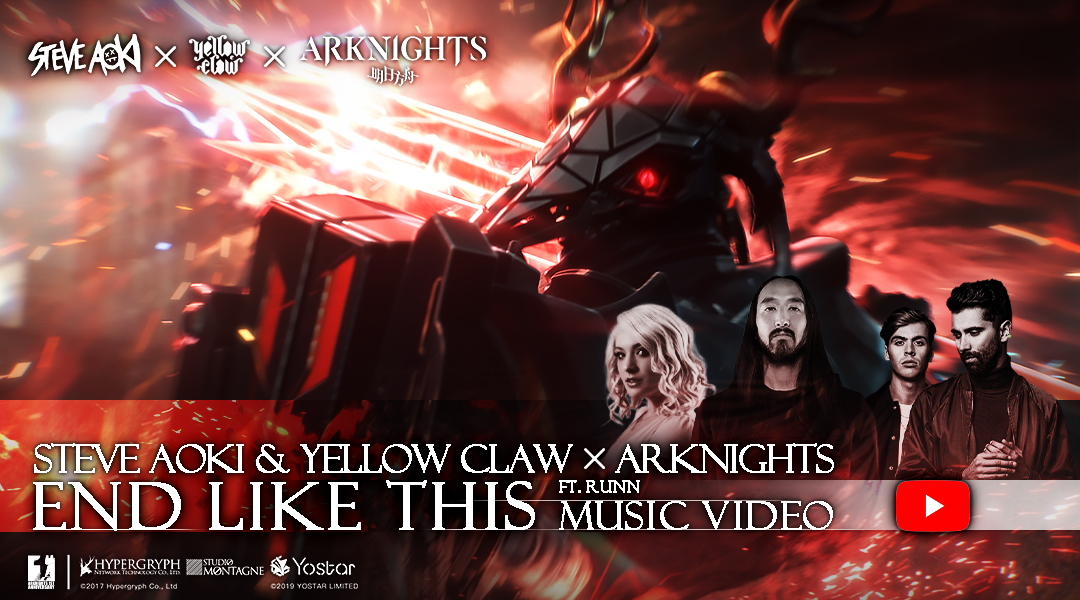 Watch the “End Like This ft. RUNN” music video now:

Similar to the last music video “Last Of Me ft. RUNN” by Steve Aoki, Arknights produced a special animation for this collaboration song, showcasing the heart-pumping battle between Rhodes Island and Sarkaz warriors. Both the soundtrack and the music video of “End Like This ” are inspired by Arknights storyline Episode 7 - “The Birth of Tragedy”. 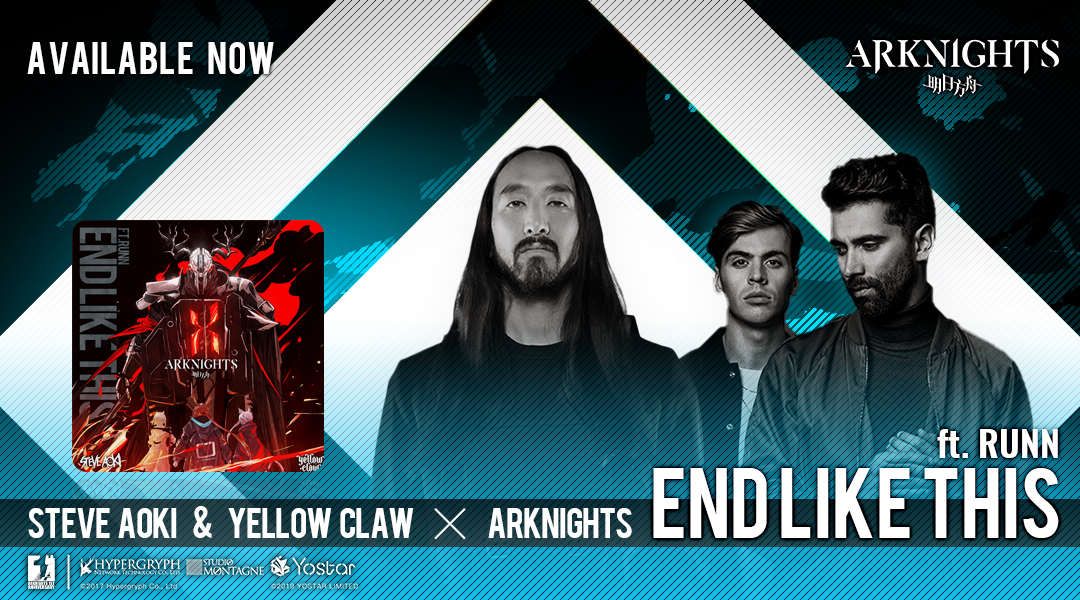 Continuing from the last music video “Last Of Me”, where introduced Lungmen City and experienced FrostNova’s struggle, Arknights introduces more about the world of Terra in “End Like This ft. RUNN” by expanding new plots, territories, and characters. Through the video, time is framed in the climax of the battle. With the intense fighting being visualized into animation, fans will be able to walk through the journey with Amiya again to witness the riot in Nomadic city Chernobog, with Rosmontis using her power to fight against enemies, and nevertheless, the growth of Amiya in the final battle with Patriot. 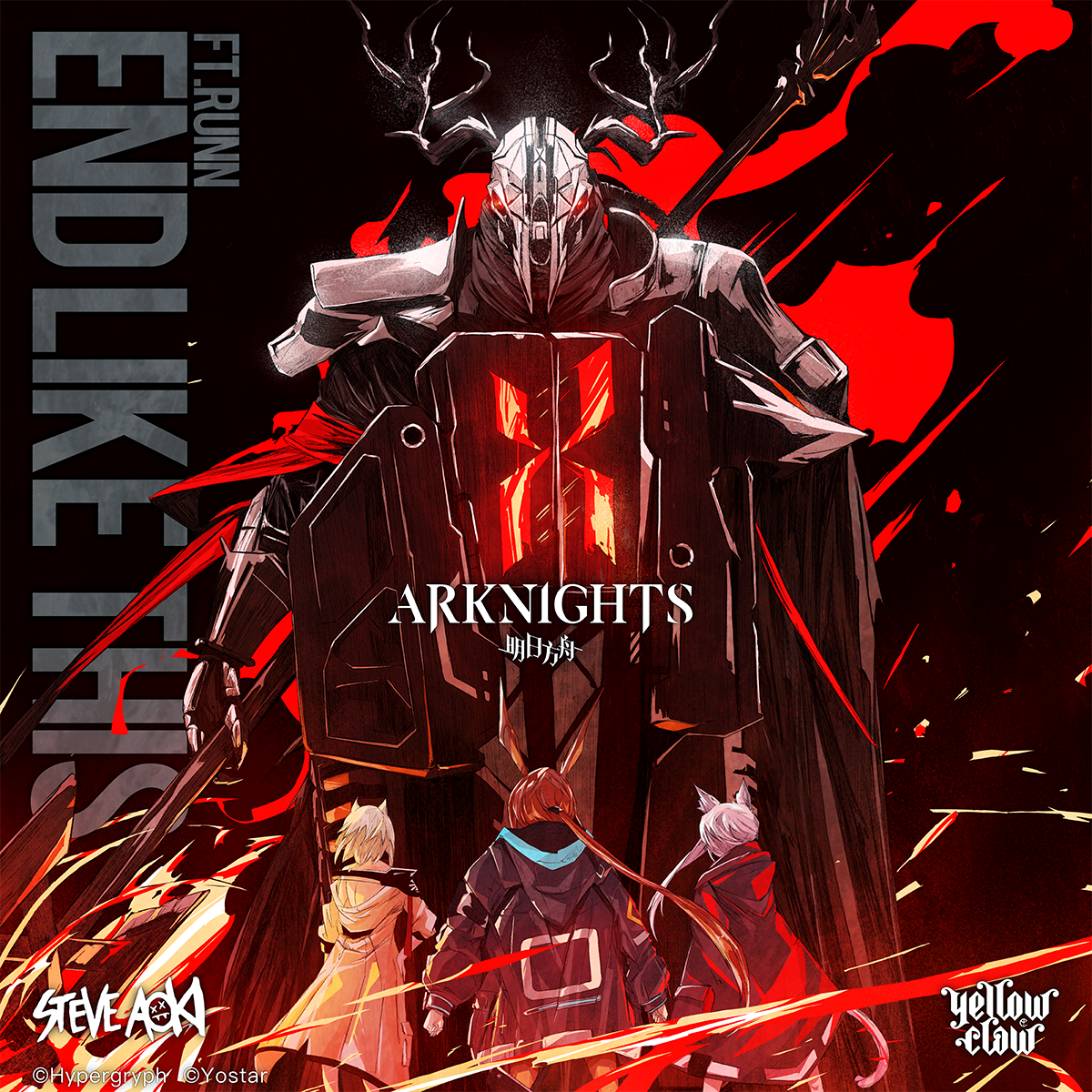 As Steve Aoki mentioned in his greetings to Arknights players, this theme song brings Arknights’ music video collaboration to a new level. The music video fits well with both lyrics and beats, ensuring all audiences to experience the immersive world of Arknights. Whether being an Arknights fan or not, everyone  will sync with the story and feel the emotions of each character.

“End Like This ft. RUNN” has successfully completed the final piece of Arknights 2020 music roadmap. It all started with the first soundtrack “Save Us From Ourselves” by Bear Grillz, one of the talented musicians under Dim Mak, Steve Aoki’s music label. Moreover, the appearances of Yellow Claw and Steve Aoki enriched Arknights community and attracted a wider variety of audiences.

Now with this new collaboration song, the Arknights global server has presented six collaboration soundtracks to players. Along with the track, players can identify the core of each event. In the year 2021, more collaboration information is on the way and will be unveiled.

Founded in 2014 and publisher of Azur Lane and Arknights, Yostar Games specializes in game development, global distribution, investment, and video game IP management. Situated in Tokyo and Shanghai, Yostar Games has rapidly become the top publisher and developer of the anime genre in China and is striving to become a global leader in the gaming industry.

Steve Aoki, the two-time Grammy-nominated producer/DJ is one of today’s most successful American cross-genre artists, collectively counting 2.8 billion music streams on Spotify. As the founder of the trendsetting record label, events/lifestyle company, and apparel line Dim Mak Records, which he founded in 1996, Aoki has helped launch the careers of global acts like The Chainsmokers, Bloc Party, The Bloody Beetroots, The Gossip, and The Kills, among many others. Dim Mak today counts more than 1,000 official releases from the biggest acts and most buzzing newcomers across EDM, indie rock, hip-hop, and beyond over its two-decades-plus discography. As a solo artist, Aoki boasts a lauded discography that includes: Wonderland (2012), his debut solo album, which garnered him his first-ever Grammy nomination for Best Dance/Electronica Album; hip-hop centric Kolony (2017), and the Neon Future series, which includes Neon Future I (2014, certified gold by the RIAA), Neon Future II (2015), Neon Future III (2018) and the recently released Neon Future IV (April 2020); which has rocketed in streaming to date and received praise from singles such as “Maldad” ft. Maluma and “Let It Be Me” ft. Backstreet Boys. Recognized by Forbes as one of the top 5 world’s highest-paid DJ’s and the world’s hardest working DJ, Aoki is “one of the most in-demand entertainers in the world” (Billboard), counting more than 250 tour dates per year. In 2012, Aoki founded THE AOKI FOUNDATION, which primarily supports organizations in the brain science and research areas with a specific focus on regenerative medicine and brain preservation. Most recently, Steve Aoki released his critically acclaimed memoir entitled BLUE: The Color of Noise published by St. Martin’s Press.