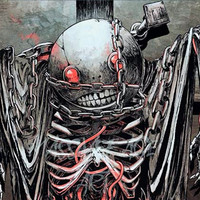 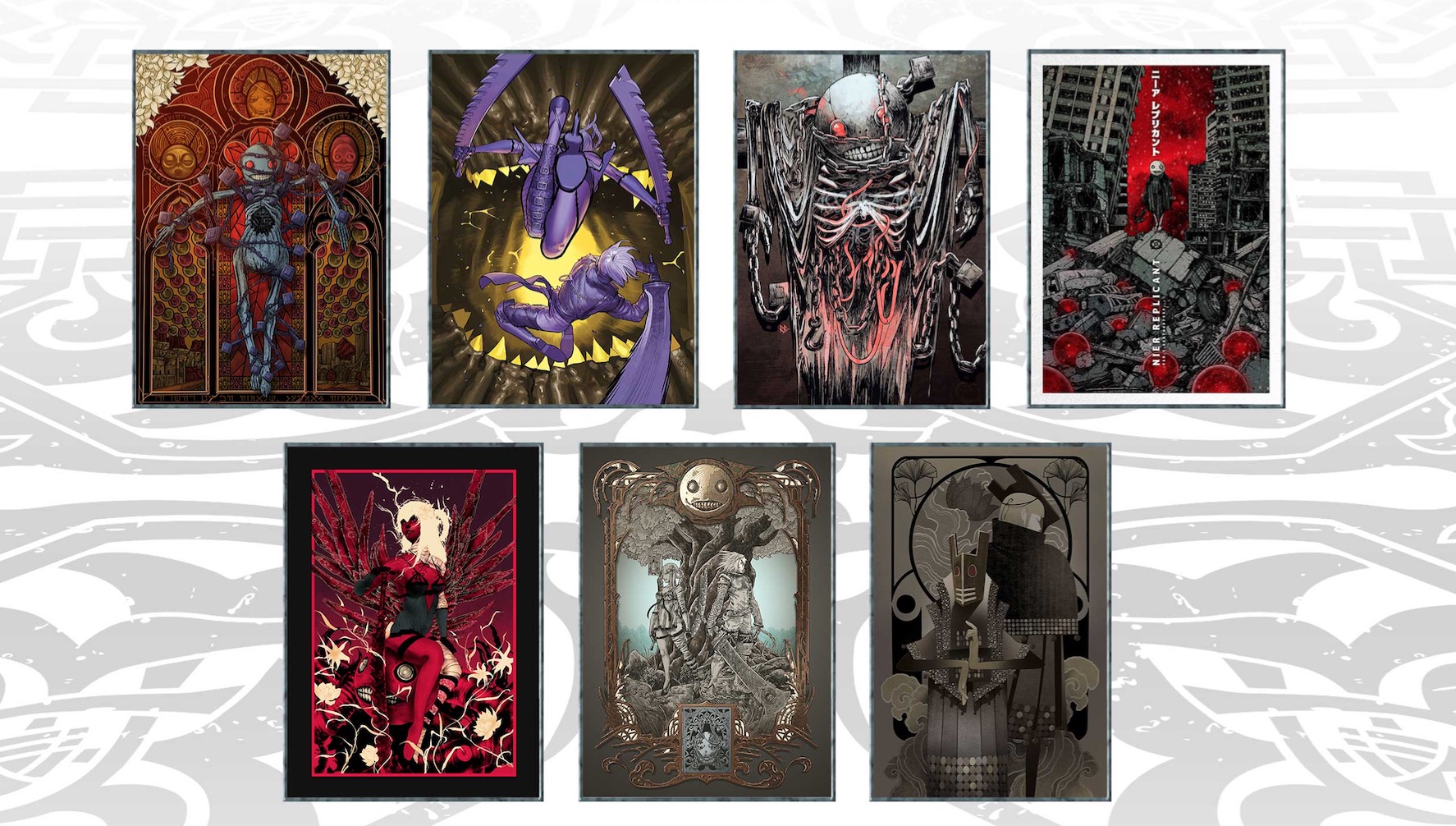 Today marks the launch of NieR Replicant ver. 1.22474487139…, as well as the 11th anniversary of the NieR series. To celebrate both occasions, Square Enix launched a digital art gallery featuring 11 pieces of art exclusively designed by a group of renowned international artists.

The art gallery can be found now on the official website. I'll show off one sample below, but turning this post into the art gallery would probably defeat the purpose of Square Enix's press release. 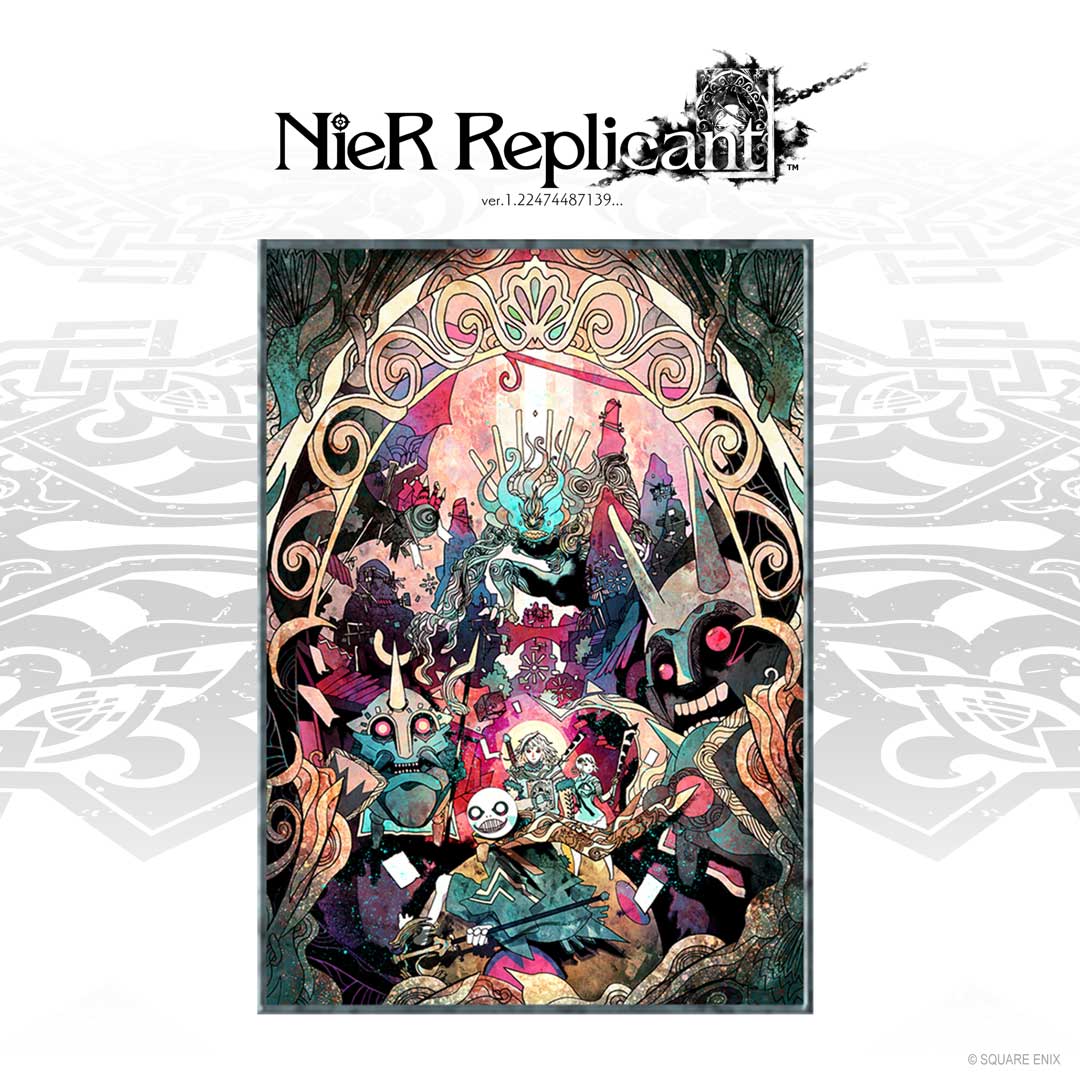 More on the artists:

Førtifem is the creative communion between Jesse Daubertes & Adrien Havet. Both previously working as graphic designers, they decided to join their skills under a common name. Focusing on illustration, mostly on paper and working with four hands, from this union emerged a style midway between striking tattoo drawings and detailed ancient engravings.

After some years in the cinema industry, Lorenzo settled in Rome (Italy) and became a full-time comic book artist, working with an American publisher. He is currently working on a project, titled “Oblivion Song”, with Robert Kirkman (author of “The Walking Dead” Series).

Adria Marquès is an illustrator and graphic designer from Barcelona. Most of his work consists of illustrating books, magazines and working for brands. He also designs record artwork, posters & merchandising for bands and music labels. His unique vintage design genre is now a brand in itself.

Guy-Pascal Vallez (otherwise known as GAX) is a French illustrator and comics artist as well as an RPG enthusiast. Gax has very elaborate and fully rendered narratives in mind when he creates his own worlds, characters and monsters and he’s unique for his colourful watercoloured finish.

Ammo studied applied arts and les Beaux arts in France. He lives and works in Brussels, as an illustrator and poster designer. He draws with small lines, little dots, graphite, inks, and loud music.

Alex is a Russian artist living in the small town of Arkhangelsk. Well known for his awesome medieval icons and Roman inspired art. He always creates with a particular attention to the structures and architecture of his drawings, making all the scenes organic.

Nicolas Côme aka Sinpiggyhead is a tattoo artist and illustrator based in Paris, France. Inspired by manga, dinosaurs, video games, superheroes, genre movies, music, and tattoos, he composes his own alternative universe: dark, but also filled with melancholia and fun. He mainly works in black dots.

Rob Bowyer (aka MassiveFace) is a UK based artist. He enjoys skulls, dingy cyber punk and fantasy characters. His particular hand drawing style is popular in the fantasy illustration business making him a high-profile modern artist. He is also known for being a hardcore gamer.

Guillaume is one of the leaders of the new wave of French illustration artists, revisiting the traditional medium of “Bande-dessinée” (comics & graphic novel). Guillaume’s genre is a mix of Japanese manga and US indie illustration. His graphic skills go with an extremely talented way of creating strips.

Nikita Kaun is a Russian artist from Saint-Petersburg. His work is almost hypnotic, if only for his surrealism, and his illustrations are like peeking into a dream. He likes mixing black and white textures with minimal pops of colour. His works have previously been exhibited in international galleries.

Francesca is a Spanish artist living in Glasgow, Scotland. As an illustrator, she is driven by traditional forms of illustration applied to contemporary themes. She uses a multi-technical approach for the realization of illustrations, as for example hand-made drawings implemented by the utilization of digital software.