Digital release will debut this fall, print will follow next spring 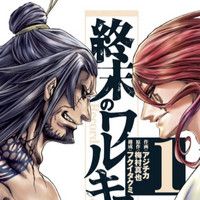 Hot on the heels of the anime adaptation's premiere, VIZ Media announced plans to bring Shinya Umemura, Ajichika, and Takumi Fukui's Record of Ragnarok manga to readers in North America. The digital version will launch first this fall, followed by a print release in spring 2022.

The manga first made its debut in the pages of Comic Zenon magazine back in November 2017, and the 11th volume just hit shelves in Japan on June 18.

Announcement: Record of Ragnarok manga is coming to digital Fall 2021 and to print Spring 2022! The gods have assembled and the verdict for humanity: destruction! @netflix pic.twitter.com/YaRsS3P4bl

Before eradicating humankind from the world, the gods give them one last chance to prove themselves worthy of survival. Let the Ragnarok battles begin.

Tags
record of ragnarok
« Previous Post
QUIZ: Which To Your Eternity Form Best Fits You?
Next Post »
Goofy Hijinks Unfold in The Case Study of Vanitas TV Anime Teaser
Other Top News
4 Comments
Sort by: