Princess Connect! Re: Dive Brings Back the Princess Gala to Celebrate the Coming New Year! 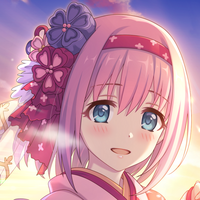 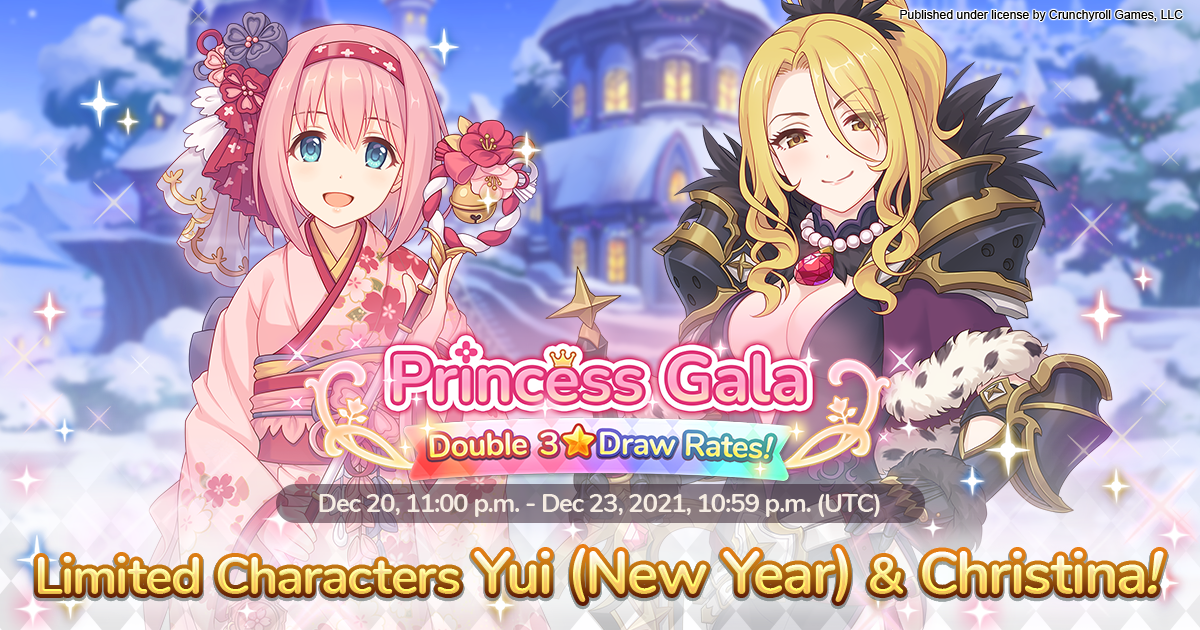 Heyas, Knights! The holiday season is still in full swing, but the residents of Landosol are zoning in onto a very special holiday - New Years! We hope you’re ready to celebrate the changing of the year. We’ve got some special new characters to announce, the return of the Princess Gala, a brand new story event, and more.

The Princess Gala’s back - tell a friend! The doubled 3★ Draw Rates are making a return for a brand new Princess Gala, featuring the brand new limited character Yui (New Year)! Alongside a brand new outfit primed for celebrating the coming year, Yui (New Year)’s skill kit is also fine-tuned to support her allies on the battlefield, while still providing that healing support that Yui is known for.

With this being a Princess Gala, you can expect doubled 3★ Draw Rates, making this the best time to meet new characters that you might have missed previously. Speaking of characters you might have missed - since this is a Princess Gala, we’re adding Christina back into the rotation for a limited-time encore appearance! The charismatic member of Nightmare, alongside the serene member of Twinkle Wish - what a perfect combo to ring in the new year with. You’ll also be able to use character redemption points to redeem for either one of the two characters. 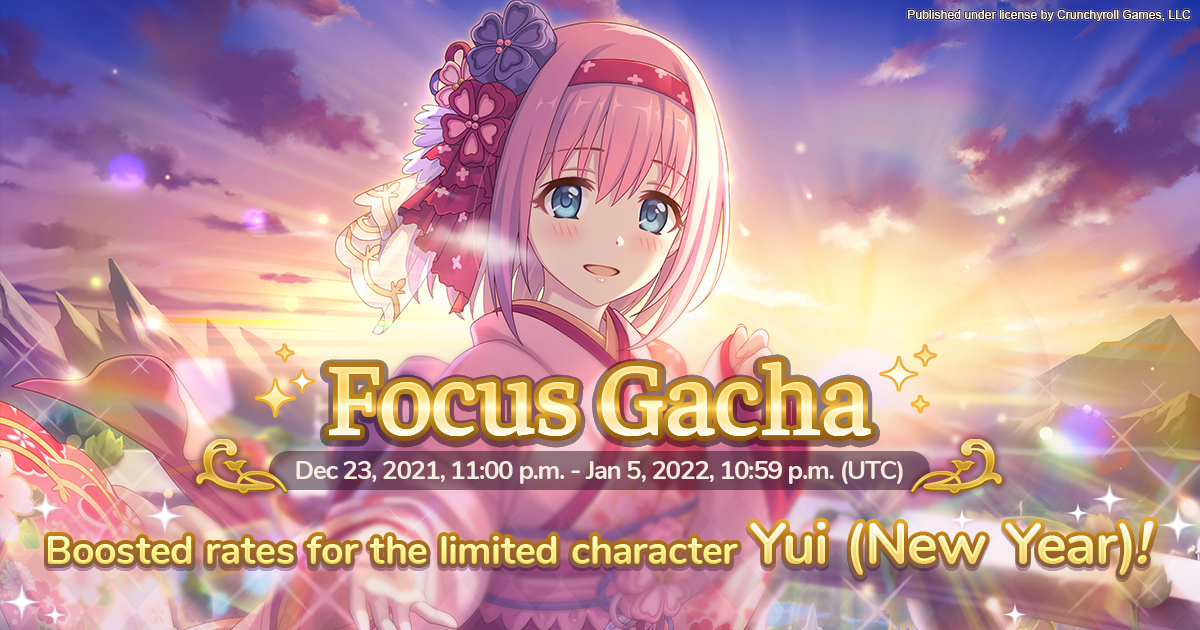 After the Princess Gala ends, we’ll have to say goodbye to Christina, but Yui (New Year) will be sticking around and getting her own time to shine with a brand new Focus Gacha! We’d be remiss to not let her stand in the solo spotlight for a bit.

Like other seasonal characters, Yui (New Year) is a limited character, which means she won’t be added into the regular Premium Gacha lineup after her Focus Gacha ends. If you didn’t meet her during the Princess Gala, you’ll definitely want to make sure to obtain her here, before the new year festivities end! 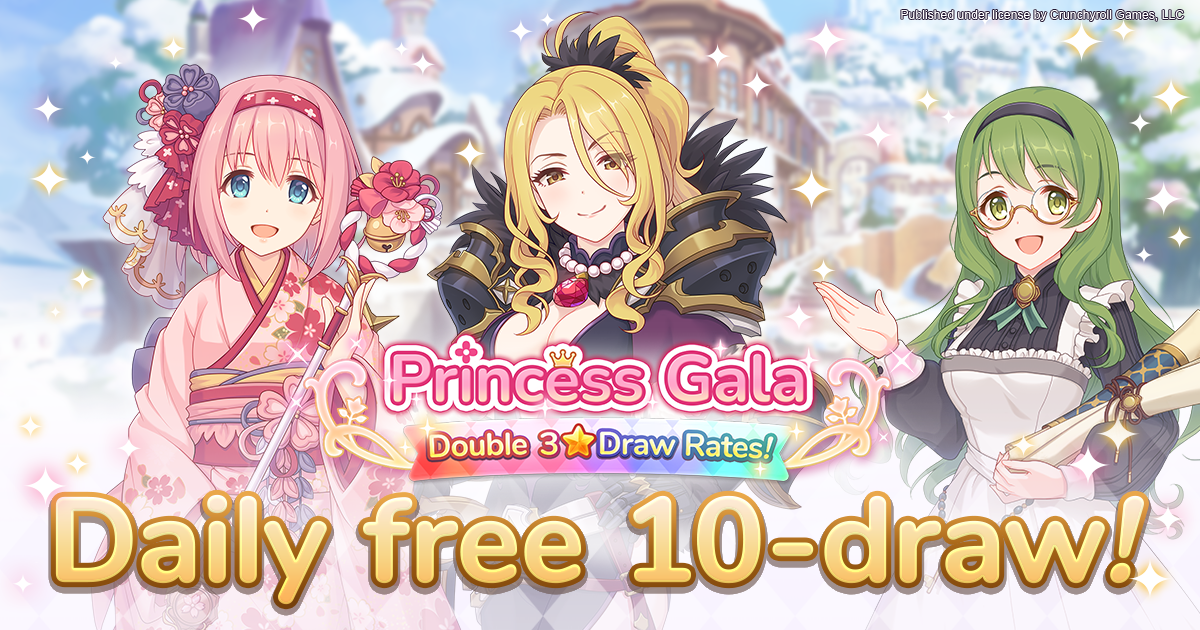 Oh, remember those Daily Free 10-Draws we talked about last time? Well, the good news is that they’re gonna carry over into the Princess Gala and Yui (New Year) Focus Gacha! That means you’ll be able to apply your Daily Free 10-Draw on the Princess Gala three times, and on the Yui (New Year) Focus Gacha once. Don’t miss out on this 6,000 jewel value! 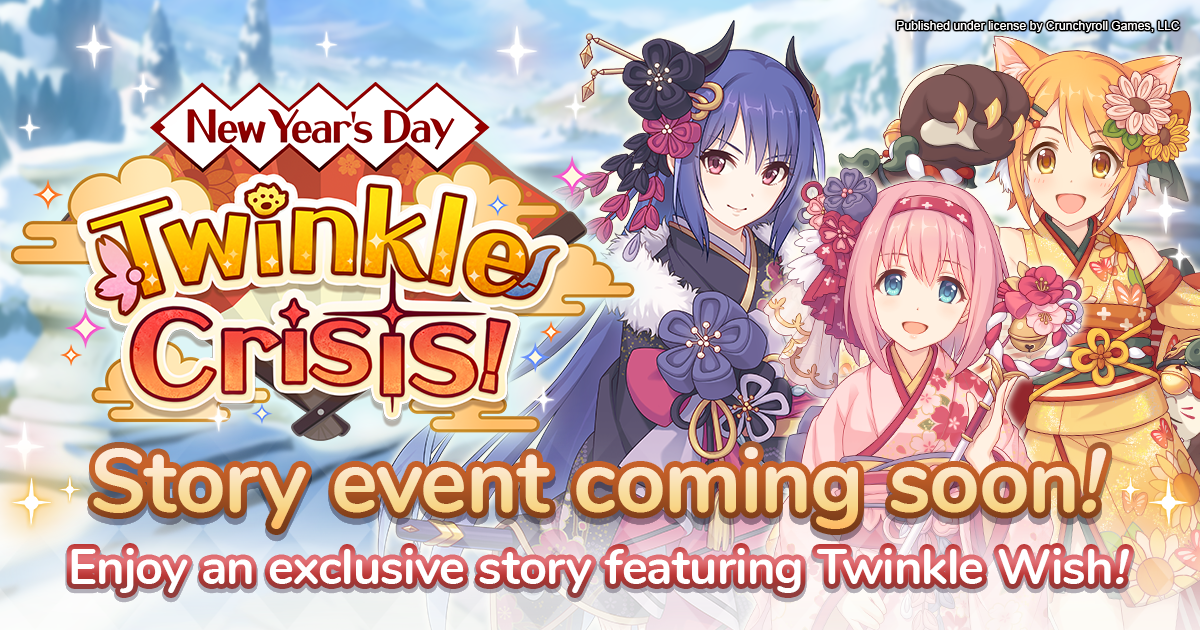 Nothing brings in the new year quite like a shrine visit. Join Twinkle Wish’s Rei, Yui, and Hiyori clad in their new year attire on a memorable trip to the shrine to help out with the festivities. Wait, you’re telling me we’re not going to get to relax? Oh well, even if things go wrong you know you’ll be able to rely on Rei, Yui, and Hiyori to get the job done! Be it monster mochi or troublesome wishes, you’re in good company. Get ready to make a shrine visit that you won’t soon forget and get your wishing game on! 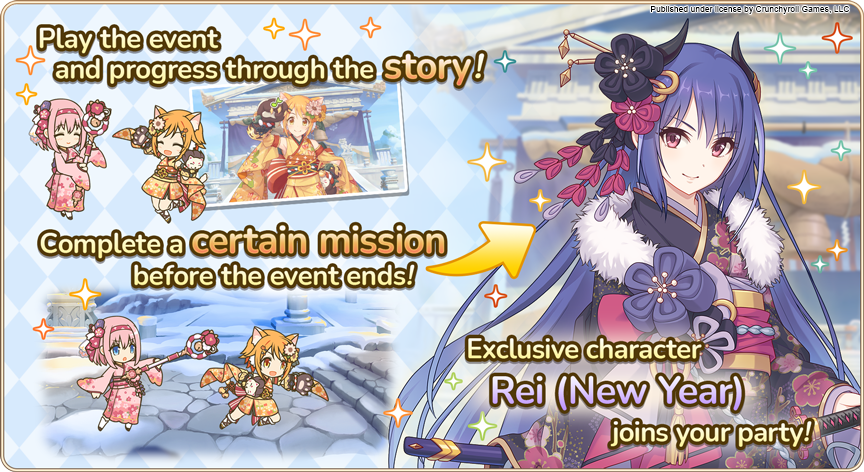 As with our Holiday event, players will be able to obtain an exclusive free unit in Rei (New Year) after defeating the boss 5 times at any difficulty level. Rei is dressed for success in her new year outfit and is ready to make a twinkling wish! Make sure to join her for a shrine visit while you still can! 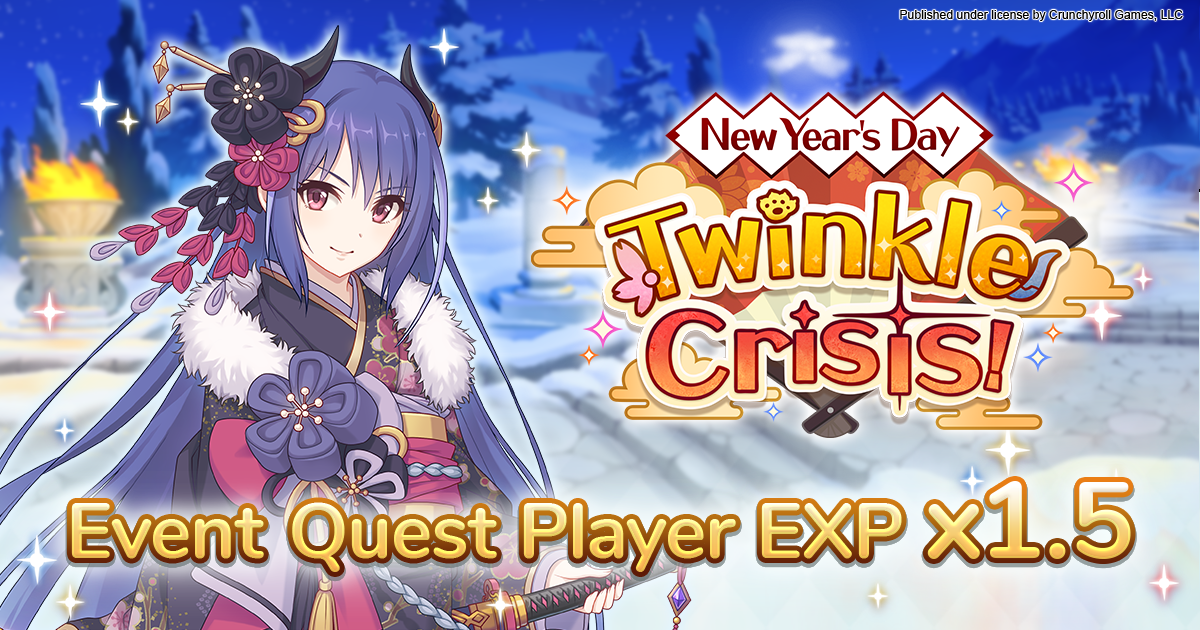 To ring in the New Year early, we’re also boosting experience gain rates for completing Event Quests. During the event, clearing Event Quests will give 1.5x times the normal experience, in addition to the normal Mana, items, and Boss Tickets that these quests give out.

The Victory Medal Gacha also makes its joyful return for the event! Clearing event stages, event missions, and defeating the previously mentioned bosses will earn you Victory Medals, which can be exchanged for a plethora of goodies. There’s a predetermined series of reward lineups, each featuring a key reward - once you roll the current lineup’s key reward, you’ll have the opportunity to either reset the rewards and move ahead to the next lineup, or hold off on resetting to clear out all the possible rewards. Here are the key rewards you should look out for! 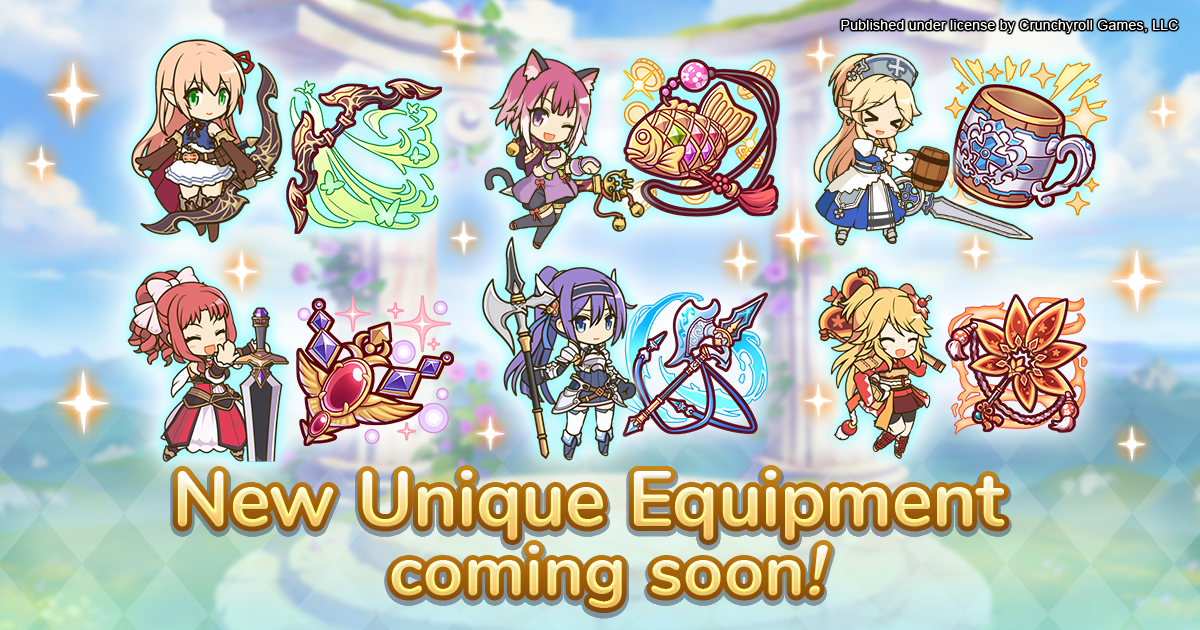 This unique opportunity for new Unique Equipment will be unlocked on 12/22 at 08:00 UTC. Now is a great time to get a head start on collecting those Princess Heart Fragments and character Memory Shards. 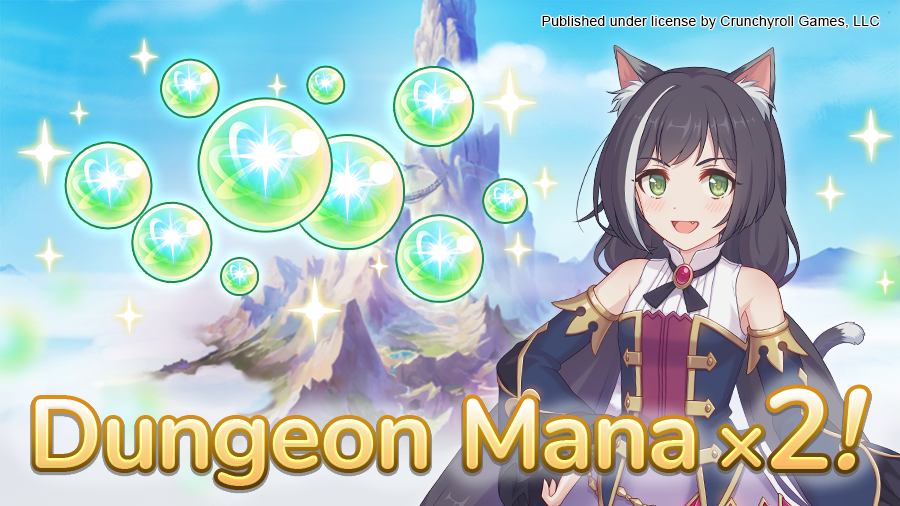 Heading into the new year low on Mana or EXP potions? There’s no need to make a wish with our selection of double drop events. First up, we have the Dungeon Double Drop Campaign, where clearing Dungeon floors will give double the usual Mana. With all the Unique Equipment coming out, you’ll want to stock up on Mana to make sure your heroines are uniquely equipped.