Adult Swim Adds Made In Abyss To Toonami Lineup 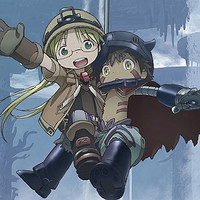 Adult Swim's Toonami block is starting the year by gradually adding new shows to its lineup, with last weekend's premiere of Assassination Classroom Season 2 being followed up by the Made In Abyss anime adaptation beginning this weekend, Saturday, January 15 at 1:30am. Adult Swim is adding new shows over the course of a month to the Saturday late-night Toonami lineup

The series first premiered in 2017 and is adapted from the manga of the same name authored by Akihito Tsukushi.The series was originally simulcast by Sentai Filmworks through a previous content licensing agreement with Amazon that led to the development of a now-defunct paid streaming channel within Amazon's Prime Video service known as Anime Strike. The manga is published by Seven Seas in the US and has the distinction of sharing the same translator as the anime adaptation in Jake Jung. HiDive describes the anime:

Within the depths of the Abyss, a girl named Riko stumbles upon a robot who looks like a young boy. Riko and her new friend descend into uncharted territory to unlock its mysteries, but what lies in wait for them in the darkness?