LET IT RIP! Live-Action Beyblade Movie in the Works with Jerry Bruckheimer Producing 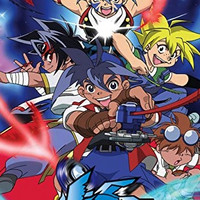 Blockbuster film producer Jerry Bruckheimer is getting ready to throw down in the arena of Beyblade with the announcement of a live-action film adaptation at Paramount. While the plot details are currently under wraps, the adaptation of Takara Tomy's top-rippin' toy line currently has Neil Widener and Gavin James on the script.

Takara first kicked off the original toy line in Japan back in 1999, letting players compete against one another in spinning top battles. With the help of a BeyLauncher, each Beyblade of varying power levels—and sharpness… seriously, don't step on 'em—can be fired off into the Beystadium. One will emerge victorious while their opponents burst into a handful of sad plastic chunks. Defeat is never acceptable. Rip is life.

We'll have to stay tuned for more details on this one. In the meantime, better start training, kid.