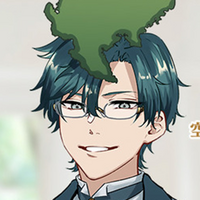 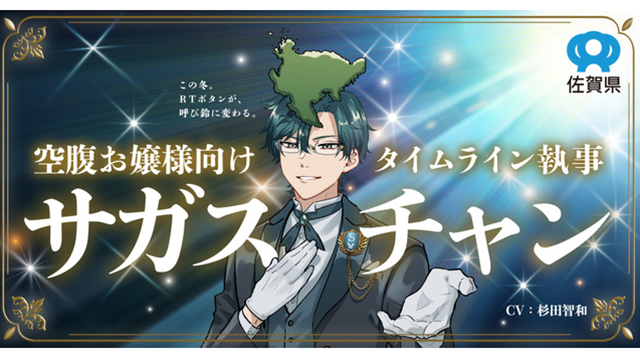 This Christmas, lots of people in Japan will be home alone instead of enjoying a celebratory meal with their loved ones. What can they do? Call on Sagastian!

The new character appears by way of Sagaprise!, an initiative to revitalize Saga and spread its charm throughout Japan and the rest of the world. The focus here is on Saga's gourmet food selection, and it's all popping off on @saga_meshi: the official Twitter account dedicated to promoting local delicacies.

The concept is an "SNS butler"—a handsome, friendly gentleman who shows up on your timeline when you're hungry and just want to be treated like a lady. Thanks to the 1974 anime Heidi, Girl of the Alps, "Sebastian" has become a ubiquitous a name for fictional butlers in Japan—including, of course, Sebastian Michaelis of Black Butler. Hence, "Sagastian"—a bespectacled manservant with a map of Saga Prefecture on his head.

Sagastian made his debut on the Twitter account today with the above video. Voicing him is Saga native Tomokazu Sugita (Gintoki in Gintama), who describes the character as "a little emotionally unstable, but an excellent butler who works hard for his employer. Probably." 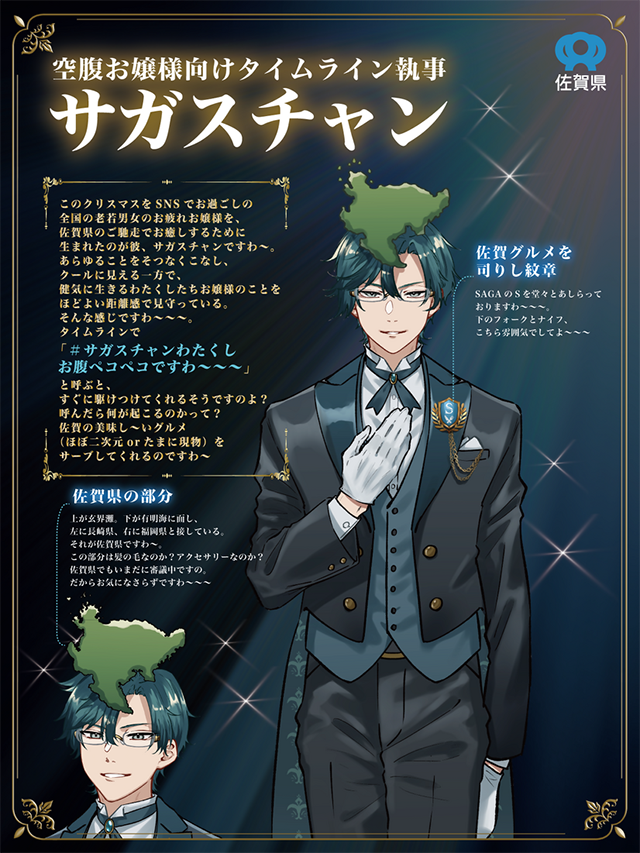 Right now, there are two Sagastian-related activities. First, you can head over to the project's official website to play My Delicious Life with Sagastian—a browser-based visual novel in which the fictional butler cares for you while also expounding on the delights of Saga Prefecture's local foods. Local players can also easily order their Saga favorites right from the page, from Saga beef and fresh oranges to a variety of desserts.

For a limited time, the Saga Meshi Twitter account is also running a hashtag campaign. Using the tag "#サガスチャンわたくしお腹ペコペコですわ～～～" ("Sagastian, I'm hungry~~~") will let you enjoy gourmet Saga dishes "in 2D"—that is, you'll get a reply with a video featuring Sagastian and a promoted food item. But 15 people who use the hashtag before December 25 will win a selection of Saga beef, afternoon tea ware, and a Sagastian acrylic standee. Sadly, this isn't one for overseas fans... but you can still enjoy Sugita's acting in the videos!

The project will run until Christmas... and apparently, there's one more Sagastian-related announcement coming on December 14.