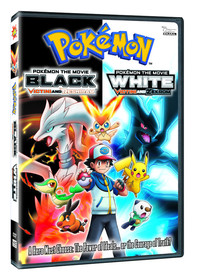 San Francisco, CA, April 3, 2012 – VIZ Media, LLC (VIZ Media), the largest distributor and licensor of anime and manga in North America, has announced the release today of a special POKÉMON movie double feature set, including the latest POKÉMON films, POKÉMON THE MOVIE: BLACK—VICTINI AND RESHIRAM and POKÉMON THE MOVIE: WHITE—VICTINI AND ZEKROM. The 2-Disc DVD set is now available under the company’s VIZ KIDS imprint and carries an MSRP of $19.97 U.S. / $19.98 CAN.  Both movies are rated ‘A’ for All Ages.

When Ash and his friends enter a battle competition in Eindoak Town, they meet the Mythical Pokémon Victini, who becomes their newest friend. But disaster strikes when the misguided wanderer Damon seizes Victini for his own plans! Can Ash prove himself a hero and earn the help of the Legendary Reshiram – or Zekrom – to rescue Victini and save Eindoak Town? Two legends and two versions of the story!

POKÉMON is one of the most successful international kids’ brands. The Pokémon Black Version and Pokémon White Version video games for the Nintendo 3DS and Nintendo DS family of systems launched in 2011 and have sold more than 13 million copies worldwide. POKÉMON animated series are licensed for broadcast in more than 160 countries and 30 languages. The newest season of the POKÉMON animated series – Pokémon: BW Rival Destinies – recently debuted in the United States on Cartoon Network.