(Marble) madness through the halls of history 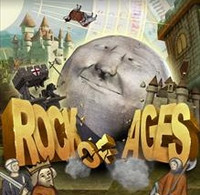 Before tackling developer ACE Team's take on the tower defense genre, I first had to look in the mirror and face myself. You see, I don't like tower defense games. The whole act of setting up defenses and then watching the enemy march robotically toward your side of the map, no matter the incarnation, makes me want to cry. Actually, if we're being completely honest here, these games stress me the hell out. Odd that something so simple can fill me with anxiety while I don't mind facing off against innumerable hordes of gun-toting mutants on any other given day.

Rock of Ages, however, is a tower defense game unlike any other. The entire premise—which is enlivened through mostly humorous, pop culture-laden takes on history from the time-galavanting perspective of Sisyphus—involves two boulders, two gates, and a race to be the first to break down the other's defenses.

Thus, there are two sides to Rock of Ages. One takes place via sky view, in which you float around a large downhill terrain, placing as many obstacles as you can afford in the path of your opponent while minions are hard at work constructing your mighty boulder. Things start out small: put a few catapults here, a few angry cows there, throw in some towers for good measure. Once the boulder is complete, the real race begins.

This is where the wild action comes into play. With defenses set up on both ends, perspective switches to a behind-the-boulder view, and it's time to get rollin'. This portion of the game controls similarly to something like Super Monkey Ball meets Marble Madness. Yes, it's been described that way countless times, I'm sure, but the shoe fits. Enemy obstacles constantly attempt to whittle your boulder down to a pathetic pebble, but smashing through towers, catapults and anything else in the way nets you more cash to put toward the next round of defense. The goal is to make it to the bottom of increasingly difficult courses with ample enough speed to go ramming right into the opponent's gate. It typically takes three hits to fully smash it, but this can increase or decrease depending on how big the rock is when it hits, or how fast it's going.

Costly power-ups also determine the boulder's durability and ramming power. Add spiked armor for extra oomph, or maybe set it on fire to really get the point across. Later there are even more specific, limited powers, like angel wings that allow for a single, soaring double jump.

Terrain gets pretty tricky early on. While the first few maps feature relatively calm, straightforward paths that serve as tutorials, it's not long before dips and sharp bends call for adept platforming. In fact, many battles will depend on just how tricky you're willing to get. Think you can make that absurd jump across those two pits just to shave off a few seconds? Go for it, but falling can be costly in the heat of the roll. Still, it's worth it for that victorious feeling that comes along with pulling off a wildly risky maneuver and barreling toward victory.

Much more satisfying traps and obstacles are unlocked throughout the campaign, which will take most maybe 4-5 hours to complete without finding all of the hidden keys. Different maps require different strategies, but it's difficult not to get attached to certain objects. For instance, I found myself almost exclusively placing these tower-saddled, monster-tusked mammoths all over the map. Then I'd watch with glee as my opponent's shabby roll toward my gate met an early end at the stomping fury of my untamed pets. Whenever I found myself on the business end of a similar scheme, though, nothing that came out of my mouth would be fit for print.

There are also a handful of boss battles that range from "stupid" to "awesome." The very first one—a fight against a cartoony dragon in a small arena—is by far the stupidest, so I almost lost hope at ACE's ability to spin enjoyable boss encounters from the thread of Rock of Ages' gameplay. Thankfully each one is very different from the last, so things pick up after that initial uninspired encounter.

I played through the main game in one sitting with a friend, trading off rolls all along the way. As fun as that was, the whole time we both knew the real madness was just around the corner. After hours of honing our experience, we would eventually have to enter heated, perpetual battle with one another. When it finally went down, it was just as intense as expected. It's also nice to play the game without having to watch the cutscenes for the thousandth time. While the humor is effective for the most part, the tone wears thin by the time the credits roll, and it honestly would have been nice to have the option to turn the repeat plays off in favor of a drab loading screen.

ACE Team's previous game was Zeno Clash, a marvelously weird first-person action title. Seriously, weird isn't even a strong enough word to describe that oddity, but you get the picture. Rock of Ages is still strange, but it's infinitely more accessible. I'd recommend it to anyone for the single-player experience alone, but multiplayer battles should keep this ball rolling for quite some time.