The Master Chief's fourth outing isn't perfect, but the franchise is in very good hands 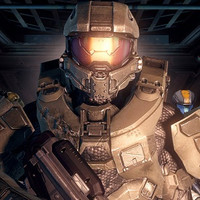 For over a decade now, Halo has been at the forefront of the first-person shooter craze. It's recently lost some footing to Call of Duty and Battlefield in terms of sheer popularity, but shooter fans have always had the Master Chief (or the Rook, or Noble Six) and his flexible, interestingly-designed arsenal available for a good ol'-fashioned shootout.

When it was announced that a new Halo title would be developed by a brand-new studio after the original creators at Bungie departed from Microsoft, there was an understandably worried reaction. Thankfully, 343 Industries have put together a beautiful, well-crafted game that delivers in longevity and character, even with a handful of jarring flaws. 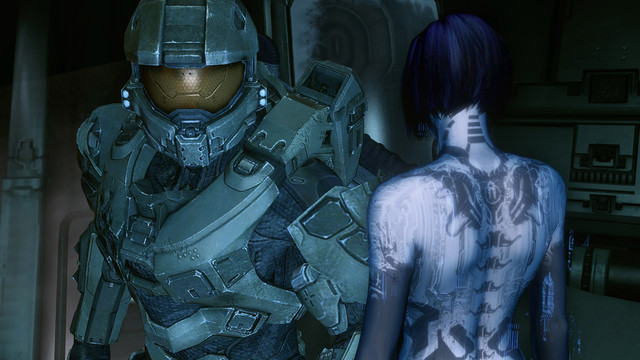 With the Human-Covenant War coming to a close at the end of Halo 3, the Master Chief (AKA John-117) has been lost in cryosleep for four years. His AI companion, Cortana, has been monitoring him and keeping tabs on their ship's sensors as they drifted aimlessly, staying functional as long as possible. Cortana awakens the Chief when their ship is boarded, and they find that they're orbiting a planet created by the long-lost Forerunner culture--and being attacked by what appear to be fanatical Covenant holdouts. Crashing Falling with style onto the planet, the Chief and Cortana have to fight their way through the rogue Covenant army, protect the troops of an allied ship that was going to rescue them, and survive against a mysterious, powerful new enemy--the Prometheans. To make matters worse, Cortana is dying--artificial intelligences only live for so long before they enter Rampancy, a stage where she will literally think herself to death unless the Chief can bring her to her creator. 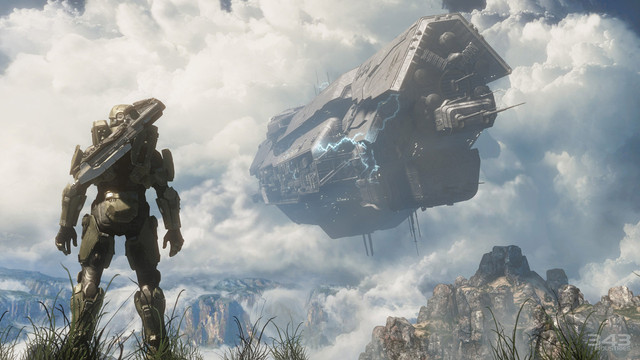 It sounds like a lot to throw into a single campaign, and it is--thankfully, Halo 4 gives plenty of development to supporting characters, but keeps the focus on the Chief and Cortana. Surprisingly, the villainous Didact barely gets any actual screen time--you'll only see him a handful of times before the final showdown. Also, even with Halo 4 starting off the new "Reclaimer Saga," it doesn't half-ass it with a cliffhanger ending, and instead gives us a complete story arc that serves as an introduction to the new trilogy. 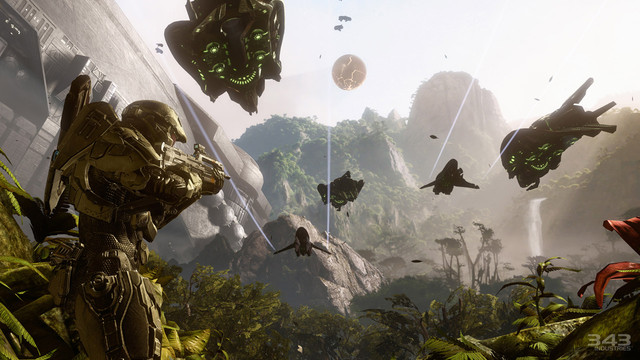 While it's a good, contained story, the real problem is that it's short, and it feels short. Usually, I blast my way through a Halo title on Normal in a few days, "burning through enough ammo to come on top" like the game describes, but Halo 4 feels easier on Normal, to the point where I only died a handful of times in select "bottleneck" areas where I was swarmed with enemies. All in all, it took me around 6-8 hours to finish the campaign, and the brief section I played on Legendary difficulty didn't inspire me with confidence either. With a little hard work, I can probably cut through Legendary in a few days, even less if I play with a competent friend. 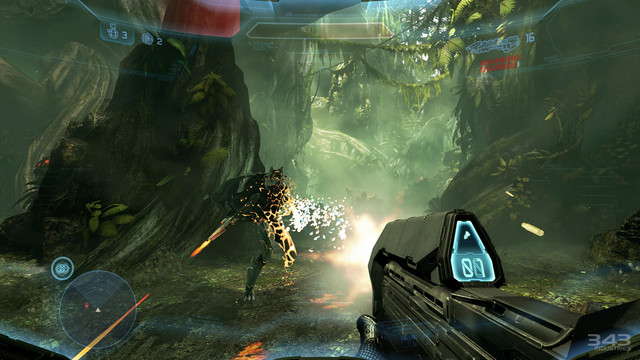 Other issues plagued campaign for me: while the Chief's slimmed-down HUD looks great and lets you quickly process information, the life bar has been removed, returning to Halo 2 and 3's "shields only" setup. Take sustained fire after your shields are down and you die, but after three years of playing with a life bar, it's a jarring change. The controls have been slightly adjusted to accommodate new gameplay elements (Sprinting is now a universal ability and not an Armor Ability), so longtime Halo players will have to take a moment to get comfortable with the new setup. Objective or waypoint indicators are slow to pop up, so after Cortana says "go North" or "we should check this place out" or "HURRY HURRY GET OUT OF HERE NOW," you'll end up wandering aimlessly for a very long moment before the indicator shows up on your HUD. 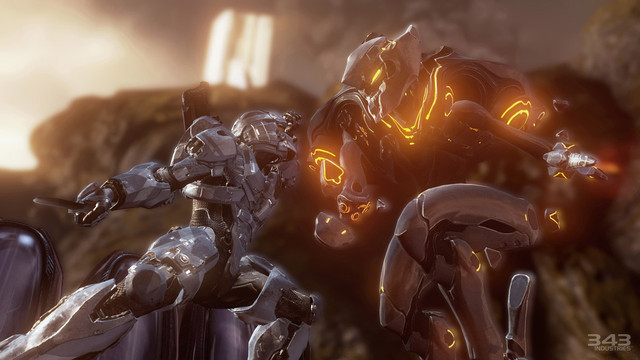 While Halo 4 provides newer, more intense enemies with the evolving Prometheans (as well as their substantial arsenal), they're not all they're cracked up to be. Most of Halo's unique and fun "sandbox" combat is about prioritizing which enemies to take down first--thin out Grunts so you don't get overwhelmed with suppressing fire, control Jackals and Elites so you don't get sniped or flanked, and take out Brutes immediately so you don't catch a Grav Hammer with your face. Unfortunately, it's impossible to quickly distinguish the different classes of Promethean Knight--probably the most dangerous class--at a glance, and since each one uses different weapons and tactics, you'll have plenty of "HOLY CRAP HE HAS AN INCINERATOR CANNON" moments while you comedically run for cover. 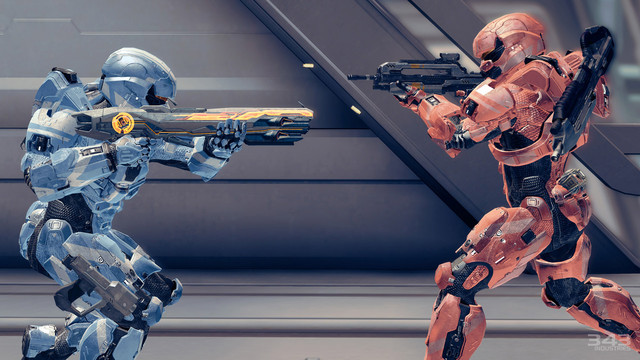 Halo always brings out a truckload of new guns for you to play with in each successive installment, but Halo 4 doesn't provide the series' usual variety. Human weapons still rule the roost, giving you three assault rifles, a pistol, a shotgun, a rocket launcher, and a sniper rifle. The only new additions are a criminally fun Railgun, a terrifying SAW machine gun, and the Sticky Detonator (my personal favorite), built specifically for setting traps like you're playing Bomberman. A few mainstay Covenant weapons show up, but almost all Brute weapons (favorites of mine) are gone except for the Gravity Hammer, and the Promethean guns all neatly fall into the same categories as human and Covenant weapons: there's a chargeable pistol, a shotgun, a fast-firing but inaccurate SMG, a zoomable rifle, a full-fledged sniper rifle, and a heavy AOE launcher. With the removal of dual-wielding and comparing it to the vast, varied arsenals of previous games, Halo 4's toybox feels lacking and uninspired. 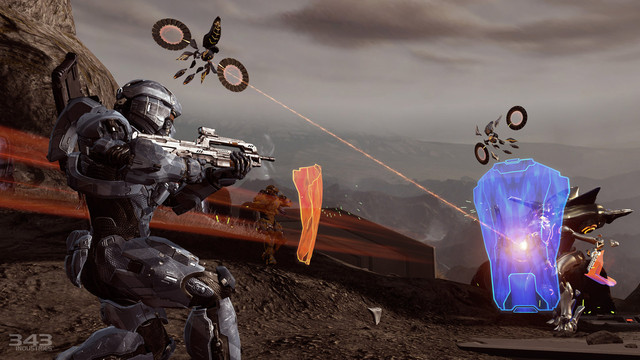 Thankfully, Halo 4's other new additions and adjustments are more interesting--the new Mantis vehicle is a Battletech-like armor frame with a gatling gun and rockets that lets you stomp your way through crowds of enemies. New Armor Abilities change up gameplay in fun ways--the Hardlight Shield gives you a breather while you recharge your shields, and Promethean Vision lets you see through walls, letting you stealthily slip past danger or assassinate unsuspecting foes. The only abilities that don't return are Sprint (now a universal ability) and Armor Lock, a Halo: Reach multiplayer favorite. 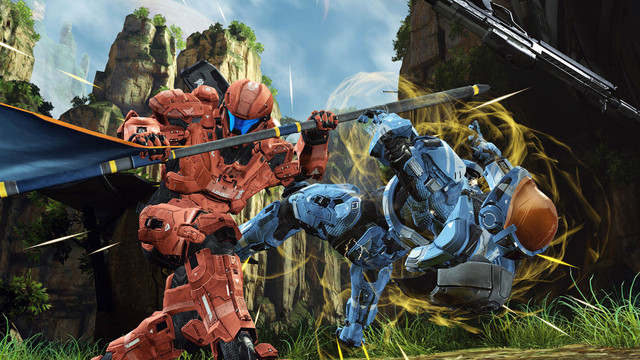 Versus multiplayer is the best it's ever been, with fast matchmaking and zero lag. It's rare for the game to pause while picking a new host (usually only when the host leaves), and multiplayer maps can range from cramped phone booth fights to massive ground battles with vehicles and across-the-map sniper support. As always, the Forge is available to customize maps, build game types from scratch, and create your own Halo multiplayer experience. Taking a page from Call of Duty, you can customize multiple loadouts for your SPARTAN-IV, unlock armor parts as you rank up and earn XP (or "SPARTAN Points" in-game) to buy weapons, abilities, and perks for loadouts, like faster reloading or unlimited sprinting stamina. Multiplayer (now called "Infinity") has the standard 4-on-4 and 8-on-8 Team Slayer, Free for All, and Capture the Flag, in addition to Halo favorites like Zombies and Oddball. However, my favorite--Firefight--is nowhere to be found. 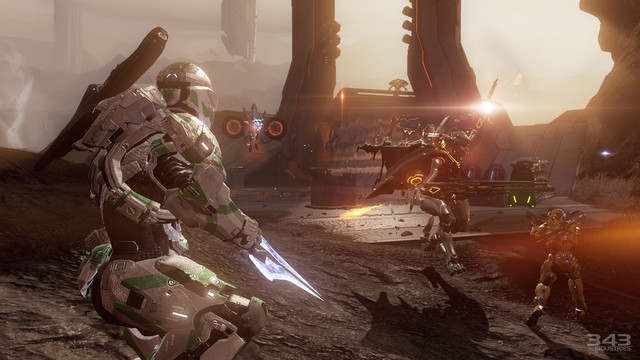 Halo 4 replaces Firefight's co-op players-vs.-CPU chaos with Spartan Ops, an episodic side story to the main Halo 4 campaign where you play as your own customized SPARTAN-IV from Infinity. Unfortunately, replacing a unique, arcade-feeling mode where you were forced to survive wave after wave of enemy assault has just been replaced with more Halo campaign action, only now within a thinly-framed "story" where you have to destroy indicated targets, then clear the map of enemies again and again. I'm personally hoping that Firefight shows up in a future DLC delivery, since Spartan Ops was a pretty disappointing fill-in. 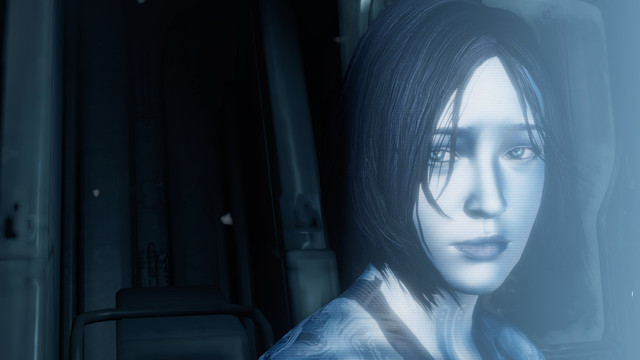 343 Industries has crafted a satisfying and unusually emotional start to the next chapter of Halo. This is a game that I'll keep going back to for its satisfying versus multiplayer, even if it seems to be cribbing more and more from Call of Duty. Right now, the best title in the series is still Halo: Reach, which still has a pretty solid online presence, a bigger variety of modes, a more varied weapon set, and a leagues-better campaign. If you've never tried a Halo title before or are just a casual player, wait for a price drop or stick with Reach. Halo 4 provides a lot on the multiplayer front, but leaves the rest of its fanbase wanting more.

+ More focused, smaller-scope campaign does not end on a cliffhanger, delivers a complete story in one go

+/- Promethean enemies provide a new challenge, but are samey and hard to tell apart

+/- Plenty of unlockable multiplayer content, but the game is taking too much influence from other modern shooters, especially CoD

- Fresh and exciting Firefight Mode is nowhere to be found, instead replaced with just-like-campaign "Spartan Ops" co-op content