This heartwarming comedy has a strong message and some valuable lessons 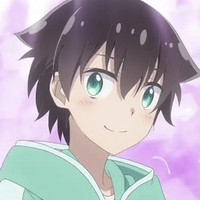 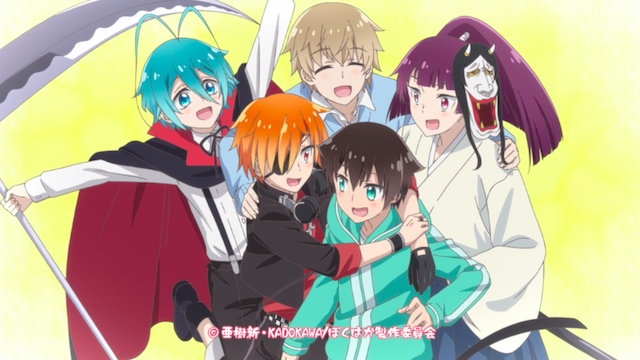 It sounds like a trite proverb at this point, but it really is hard to be yourself. Within social settings specifically, most of us learn very quickly from an early age who is 'cool' (a.k.a. who society deems to be socially desirable in many different facets), and who is 'uncool' (a.k.a. the people society conditions us to believe are not desirable, intelligent, noteworthy, etc.). A quick glance at history quite clearly shows that we often judge and ostracize others based on prejudiced, and frankly, violent notions about class, race, and gender. These judgments are deeply structural and embedded within the frameworks of our educational system, our work environments, and so much more. Is it any wonder then that so many of us shy away from standing out, and decide to silently conform to what the world tells us to be?

This is why I find it refreshing to watch a show like A Destructive God Sits Next To Me. Based on the manga series by author Arata Aki, A Destructive God is a heartwarming comedy with a strong message about staying true to yourself (more on that soon). It stars a boy named Seri Koyuki who can't seem to shake an eccentric band of high school weirdos, one of whom is Kabuto Hanadori. Hanadori has fashioned his identity into "the knight of light and darkness," and wears an eyepatch that supposedly conceals his alter-ego, the god of destruction. Hanadori is dressed daily like a JRPG character and unwittingly wreaks all kinds of havoc on Koyuki's life.

I admit, the series didn't strike me as unique or intriguing at first glance, especially since I'm particularly picky when it comes to comedy in general. Thankfully, the show is legitimately funny—I chuckled more than a few times at the myriad of exagerrated chibi parts—and uses its light-heartedness to explore deeper themes about imagination, authenticity, and companionship. With that in mind, let's uncover some of the valuable lessons A Destructive God has to say about the benefits of honoring your true self.

Lesson 1: Being True to Your Inner Creativity Can Help You Deal with Boring Life Responsibilities 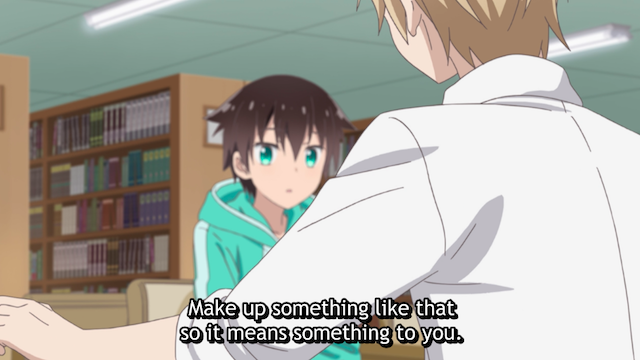 Koyuki faces infuriating roadblocks when it comes to his education: his grades keep suffering, which he views as Tsukimiya—a classmate who can practically read minds and takes sweet delight in embarrassing others—and Hanadori's fault. Koyuki gets paired with Hanadori and Tsukimiya in a school project, and witnesses the bizarre and uh, perverted techniques both of them employ while studying for tests. Hanadori draws cartoonish sketches and relates historical figures to fictional battles from the personal fantasy world he built, while Tsukimiya memorizes facts about amino acids by illustrating what appears to be hentai. Hilarity ensues as Koyuki bombs the test and finds out that Tsukimiya and Hanadori consistently get better grades than he does.

Amidst the comedy, Tsukimiya gives pretty poignant life advice to Hanadori when he tells him to make up something related to his self-built fantasy world, something that 'means something.' This, combined with the later scene when Tsukimiya and Hanadori get high scores, offers a lesson about creativity and remaining true to your unique qualities. Tsukimiya uses his own creativity (his art skills), and Hanadori uses his imagination (his lush mental creations) to successfully deal with the boorishness of school life. Instead of rejecting their own weird quirks, they use them to make an important life responsibility (studying) more bearable. A Destructive God suggests that it's always worthwhile, and important, to keep your selfhood intact in whatever you do. No life duty—whether work or school—should ever come at the expense of your beautiful shining self.

Lesson 2: Being Your Real Self Can Inspire Others to do the Same 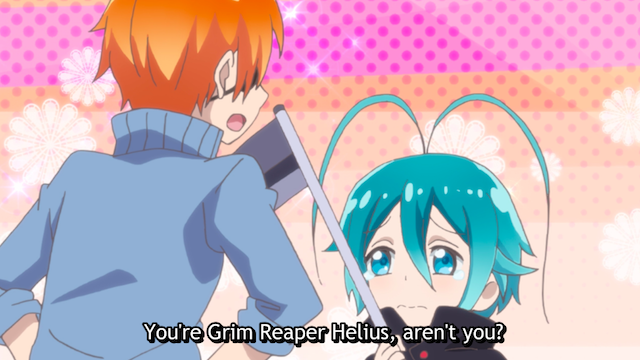 Episode 3 introduces a hilarious new character named Helius, who at first calls himself one of the 'four gods of destruction,' until eventually accepting his own unique, wacky identity as the grim reaper. Helius confesses that he wanted to be like Hanadori, because he was inspired wondering what it would feel like to not be afraid of other people's opinions. Helius's initial step into self-acutalization starts because Hanadori had the courage and strength to be himself (which just so happens to be a self-created mythology about being a malevolent entity). When Helius says he feels ostracized in spite of his new found identity, it is the joint words of both Tsukimiya (though tainted with his own somewhat-sinister, mocking spin to it) and Hanadori—two characters who are unabashedly themselves—that reaffirms Helius' drive for authentic self-expression.

And Helius isn't the only one. After hearing Hanadori's speech, Koyuki takes it to heart and feels as if Hanadori was speaking to him, as well. Koyuki is a character who largely strives to be normal, well-liked, and avoid peer embarrassment. Most of what he does is reactive, rarely acting out of his own wants and desires. But Hanadori's speech gives Koyuki the push to really consider his own needs and desires, which leads Koyuki to begin his exploration of future careers he would want for himself. In these scenes, A Destructive God depicts how being yourself can have a positive widespread effect: other people might take notice, and that can lead to huge self-affirming changes in more than one person's life.

Lesson 3: The Right People Will Honor and Care About You If You Stay True to Yourself 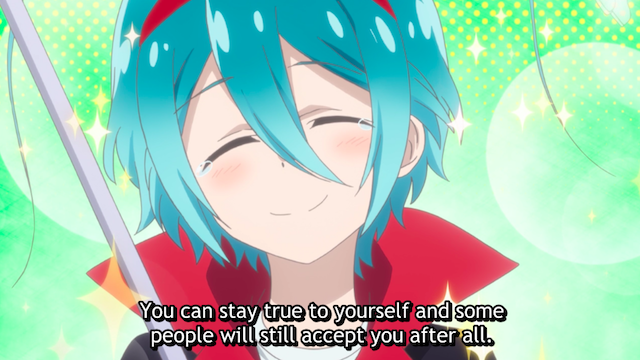 It's also in episode 3 where we find another important lesson about selfhood. After Helius' intensely embarrassing moment involving bird poop, the girl paired with him surprisingly takes the feathery fecal matter in stride and wipes it away with her handkerchief. Helius learns from this experience that it's possible to be your real self—in all its glorious eccenctricity—and still be liked by others, by people who aren't ashamed or revolted by who you are.

At one point, Hanadori himself has a hard time believing his own advice about self-affirmation. Hanadori suppresses Miguel, his god of destruction alter-ego, which seems to be a sort of stand-in for his anger and 'negative' emotions. Once he finally decides to let go and express his 'evil' side, Hanadori—similar to what Helius experienced—is met with cheering applause from his peers rather than derisive laughter. Both characters ultimately learn there is a place for everyone, and in this world there will always be people who will root for you as a whole person, exactly as you are.

A Destructive God Sits Next To Me may not be a revelatory or groundbreaking series so far. But even 4 episodes in, I'm happy I gave it a chance, and you should, too.

What other anime do you love that champions being yourself? Let us know in the comments below!