Next game in "Steins;Gate" series announced for noitaminA block 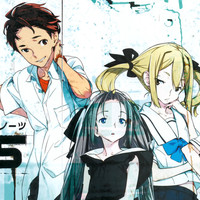 At the 2012 lineup presentation for Fuji TV's noitaminA anime block that was just held, 5pb/MAGES head Chiyomaru Shikura took the stage and announced that an anime adaptation of the video game Robotics;Notes will be heading to the noitaminA block in Fall 2012. Robotics;Notes is the 3rd game in 5pb's Science Adventure Series following Steins;Gate. Robotics;Notes, the game, will be released June 28th, 2012 for Xbox360 and PS3 in Japan.

They also announced that the other Fall 2012 anime series will be a new original series called PSYCHO-PASS but provided few details.