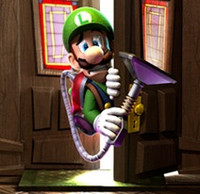 Luigi's Mansion: Dark Moon is still a couple months away, but Nintendo outlined a first for Mario's brother (outside of Nintendo Land, at least): Multiplayer. Specifically, Dark Moon will feature both local and online multiplayer with Download Play capabilities.

Hunter Mode puts players in control of different colored Luigis and challenges them with hunting down ghosts and using teamwork to clear each floor within a set time limit. Difficulty can be adjusted, as can the number of floors (5, 10, or 25), and boss battles await at the top. Do well and you'll earn bonuses and upgrades.

Here's a look at Hunter Mode in action:

Like many of Nintendo's recent titles, Luigi's Mansion: Dark Moon will be available both at retail and as a download via the Nintendo eShop when it launches in North America on March 24.