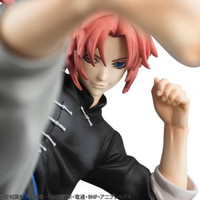 The newest figure in Bandai’s women-oriented “G.E.M. Series” figure line will be a new version of character Kamui from anime and manga series “Gintama”. The figure is currently available for preorder through Bandai’s online store, Premium Bandai and in the Crunchyroll Store.

The figure depicts Kamui, the older brother of Yorozuya member Kagura, in a fighting pose. The high level of detail adds excitement and dynamism to the figure, with accents such as Kamui’s braid floating through the air and the individual creases of his clothing contributing to the sense of realism. The finished product truly does justice to the strong Yato clan fighter.

The 1/8th scale figure measures approximately 200 millimeters tall, and retails for 12,528 yen. Quantities are limited, and preorders will end when supplies are exhausted. Orders will ship in late June.

Kamui is posed with his right leg in mid-kick.