Uesaka: "I am very honored to join the PreCure series with so much history!!" 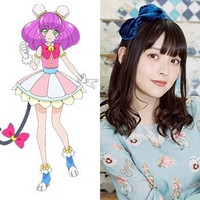 This is her first appearance in the 16-year-old anime franchise. She plays a space idol character named Mao, alongside Subaru Kimura (Gian/Takeshi Goda in Doraemon) as Doramsu, a rich family's spoiled son.

"I am so honored to join the PreCure series with so much history!! Mao-chan is a character who is active

as space idol, and her atmosphere like 'She is absolutely the ideal idol!' makes her so attractive. I did my

best to say the 'Nyan♡" in the end of her sentences cutely. It is so exciting just to imagine about the space

and the constellations. I believe the sparkling world of Sta-Pre will awaken the power of imagination that

you have. Please look forward to seeing Mao-chan's activeness!!"