FEATURE: Novel vs Anime - Is "Eromanga Sensei" Worth Watching?

How does the Eromanga Sensei light novel compare to the anime? 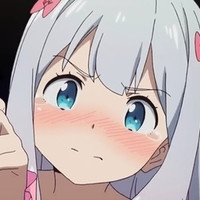 If there’s one series that will attract strong opinions this season, it’s Eromanga Sensei. The story appears to be a romantic comedy about a boy and his little sister, and is based off a light novel written by the author of OreImo, another series that is no stranger to controversy. Having read the light novel, I can say that the content is fairly tame for the most part, but I doubt it’ll convert too many people to the little sister subgenre.

As an anime, however, Eromanga Sensei is actually pretty good. It takes the stereotypical characters in the light novel and makes their personalities shine. But it’s also a more extreme version of the light novel—in more ways than one. 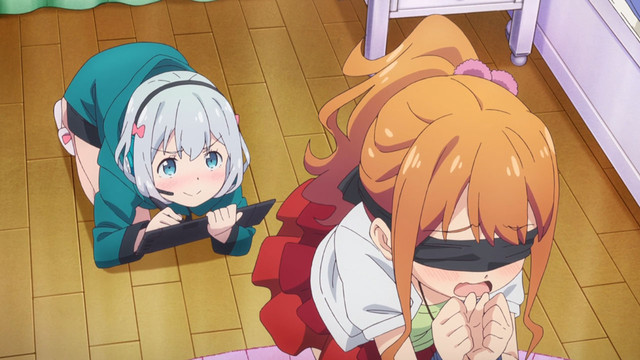 I think it’s tempting to underestimate the level of craft that goes into something like Eromanga Sensei. It’s not easy to make stock anime characters stand out in an oversaturated TV anime environment, but Eromanga Sensei manages it by making the characters more expressive than usual. Not only do they sport excellent reaction faces, their body language is full of quirks and idiosyncrasies. Elf Yamada is constantly preening and making dramatic flourishes, while Sagiri often bunches up her hands and feet in an attempt to make herself look smaller whenever she’s flustered. Evidently, the staff cares a great deal about capturing the mannerisms of these characters because Sagiri even has her own animator (named Keisuke Kobayashi) who handles all of her important scenes.

My favorite moment in the anime so far is the pseudo-date between Elf and Masamune in episode 6. It wasn’t a particularly standout scene in the light novel, but in the anime it’s absolutely hilarious to watch the characters react to each other. The anime homes in on their tiniest movements, making it very plain to see how Elf’s body language is influenced by what Masamune does, and vice versa. When I read that scene in the light novel, I didn’t imagine Masamune making all those flourishes in Elf-like fashion, but it completely fits the tone of the scene. The way these characters are animated really makes them come alive.

The anime is also really easy to watch because the direction is so full of energy. The comedic timing is excellent; the director Ryohei Takeshita knows how to let the absurd situations escalate for maximum payoff instead of going for the quick and cheap punchlines. The show is also full of quick cuts and dynamic camera angles, always keeping the characters moving even when it’s just showing a conversation. Episode 1 was especially good at portraying the duality between Sagiri and Eromanga-sensei without any need for words. 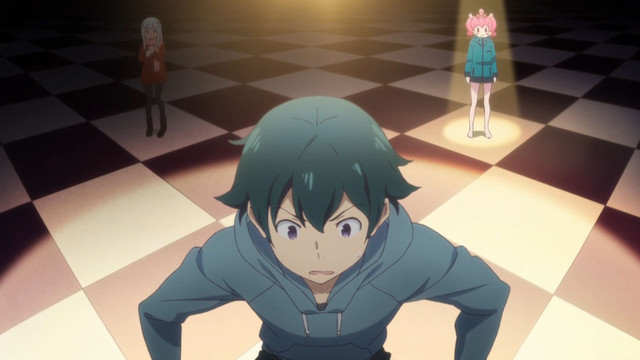 All of these aspects come together admirably on the screen, resulting in a show that is much, much better than how it sounds on paper… but still I hesitate to recommend it.

The thing with Eromanga Sensei is that it’s really good at being something that I don’t expect everyone to appreciate.

The same beautifully animated scenes that depict Sagiri’s girlish mannerisms also focus heavily on her thighs, bottom, and even her chest. As far as ecchi fanservice goes, it’s fairly tame, but Sagiri is twelve years old and looks the part. The light novel doesn’t sexualize Sagiri to such a degree, but given that the author has spoken approvingly about the anime’s portrayal, saying that Sagiri’s cuteness is the single most important part of the story, I don’t believe the fanservice goes against the author’s intent. I’m sure that everyone has their own mileage when it comes to fanservice, but I can’t on good conscience recommend Eromanga Sensei without letting people know about the extent of it. 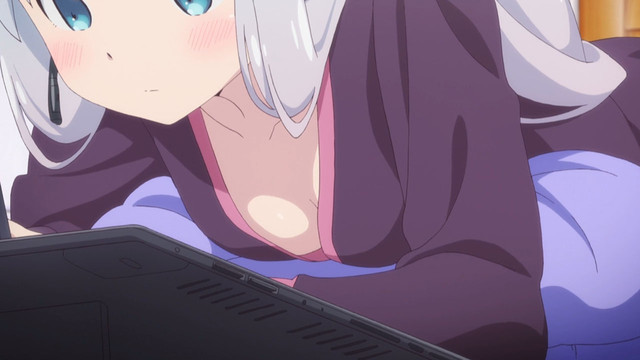 This all brings up an interesting question. Can you separate the good animation in Eromanga Sensei from its artistic goals? It’s easy enough to appreciate individual cuts of animation out of context, but animation really does work best when it’s at the service of a broader theme or narrative. When it comes to anime, you can’t necessarily separate the animation from the story, because the animation is the vehicle through which the story is told.

In the case of Eromanga Sensei, the anime is a definite improvement over the light novel, simply because of the way the story is told in the anime. When Eromanga-sensei forgets to turn off her webcam in episode 1 and starts taking off her clothes, there’s a sense of urgency in the anime that isn’t present in the light novel. We see all of her painstaking movements as she unzips her oversized parker; the whole scene is framed in a voyeuristic manner. We also see enough of her partially obscured body to seriously wonder if her livecam audience will end up perving on her too. This element of danger is absent from the light novel, which is only told from Masamune’s perspective.

But the anime also accentuates the most uncomfortable elements of the light novel, too. The scene in the above paragraph enhances the dramatic tension, sure, but it’s uncomfortable as heck to watch. The same episode even includes a shot of Sagiri photographing her own bottom so she can draw it for her drooling audience. If perving on Sagiri is the goal of the animation, then it’s not a goal that I can get behind.

Yet outside of those specific scenes, I still really like the Eromanga Sensei anime. Fanservice may be the point of this anime, but not all of it is sexual, and when the animation simply serves to emphasize how cute the characters are, I have no problem with it at all.

So in the end, I suppose it comes down to your tolerance levels. There are some parts of Eromanga Sensei that I simply dislike, no matter how well animated they are on a technical level. In fact, the detailed animation makes it worse, because there’s too much realism in the drawings to make it easy for me to mentally separate Sagiri from an actual twelve-year-old girl. I’m just glad that these parts don’t dominate the entire anime.

Otherwise, I think that Eromanga Sensei is an enjoyable series with fun characters, and that the anime version is far superior to the light novel. For me, at least, the good parts are strong enough to outweigh the bad parts. But I can perfectly understand why people would have strong feelings about this series. Give the first episode a try, at least, and see how it strikes you!