The Wild Brilliance of Symphogear 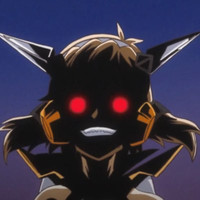 Hey everybody, welcome to Why It Works. The summer season’s finally begun, and we’ve already got quite the variety of shows to check out, but personally, my heart is still waiting for one show that’s yet to appear. Among other many other attractions, Summer 2017 marks the beginning of Symphogear AXZ, the fourth season of a very worthy franchise. AXZ hasn’t actually started streaming yet, but I still have faith, and its late arrival only means you all have more time to catch up on the story so far. Why should you do that? I’m glad I assumed you asked. 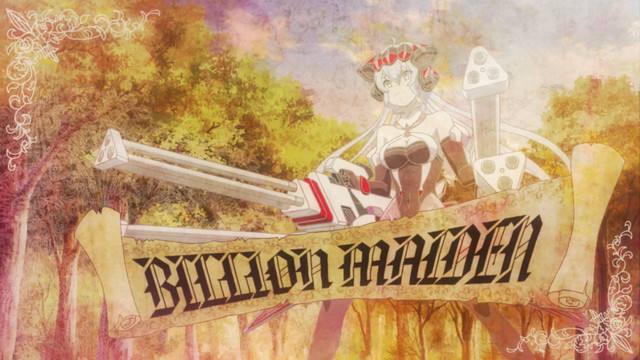 Symphogear has flown under the radar for three seasons now, in part because its earlier seasons weren’t all conveniently available (a problem that has now been fixed). Symphogear also looks like it would fall halfway between an idol show and an action show, which gives it a pretty specific immediate appeal. The show's titular characters use the power of song to activate their transforming battle suits, and then continue to sing while they fight aliens, robots, or whatever else happens to be jeapordizing the future of the world. The show's mix of genres is certainly a little odd, but even if you’re not really an idol fan, I assume you can appreciate a show where people sing out their feelings while beating the crap out of each other. Symphogear is without question my favorite action series of the last few years, and it all starts with, well...

Symphogear Strategy #1: A Lack of Restraint

Symphogear’s first episode opens with the death of the protagonist Hibiki, segues into a bizarre monster attack at a giant stadium, features a girl singing so hard she actually explodes, and ends with Hibiki transforming into some kind of Cronenbergian mechanical berserker. Later episodes only get more crazy than that, until by the third season the show’s stars are surfing on missiles and punching through mountains. Heroes with power gauntlets and racks of gatling guns square off against undying goddesses, mad scientists, and even some kind of tiny alchemist-wizard. If you can imagine it, Symphogear has done it. 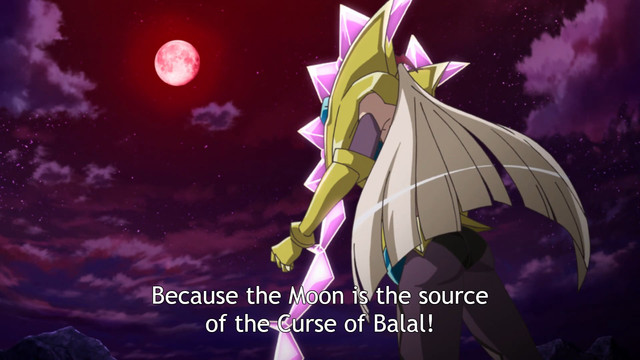 Like JoJo’s Bizarre Adventure, Symphogear is one of those shows that actually plays out the way you remember childhood action shows playing out. Its action highlights are absurd and plentiful, riding on a sense of whimsical anything-goes creativity to constantly top themselves. Its fights rarely devolve into groundless “stuff happening,” though - there are always clear stakes and clear goals, and the show is equally at home offering thrilling chase scenes, one-on-one brawls, and all other manner of distinct adventure scenarios. Its action feels exciting in spite of being absurd, which can at least partially be attributed to…

Also like JoJo (seriously, if you like JoJo, Symphogear is absolutely for you), Symphogear rarely bogs down its gleeful adventuring with mopiness or grim self-seriousness. If Symphogear really tried to sell the seriousness of its setting, it would fall flat - but Symphogear understands this, and so instead we get sequences like a Rocky-style training montage and Hibiki’s classmates singing an ode to beef stroganoff. 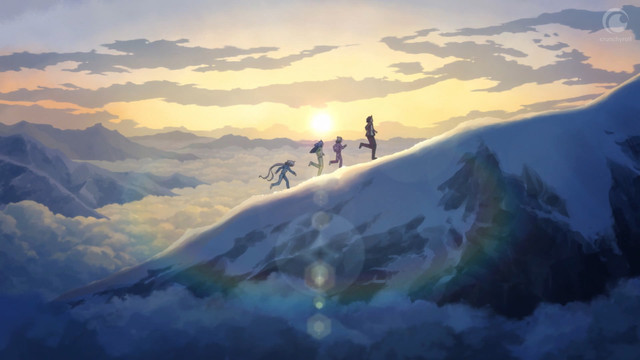 The space between battles isn’t filled with dreary reflections on the state of the world - this show’s characters like each other, and riff on each other in all sorts of ways. And when the fights do come, they’re enlivened by awesome tricks like stylized attack banners, as well as the show’s bevy of punching-and-or-friendship-related songs (some of which may be less cheery than others). But I mentioned characters actually liking each other, so let’s finish off with…

Like many shows that are mostly about fighting, Symphogear is also sometimes about friendship, and it certainly earns it. Protagonist Hibiki is competent, hard-working, sensitive, occasionally scatterbrained, deeply loyal to her friends, and absolutely convinced she could eventually reach out to just about anyone. The show even underlines this with her “weapon” - instead of using swords or guns or giant scythes or spinning saw blades (yes, really) like the other Symphogears, she just has her fists, used to both punch evil and offer an open hand. Hibiki struggles with how to best help the people she cares about, and always emerges stronger. She’s a legitimately great protagonist, a person it’s easy to root for and thrilling to follow. 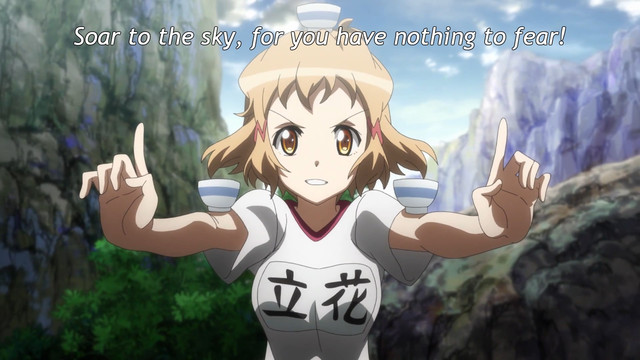 Hibiki is also the center of a cast that’s altogether charming, defined by a variety of unique friendships and plenty of great eccentricities. The show cares about its cast, and that care comes through in how every single one of them gets to be a hero in their own way. The show has a genuine exuberance about it that bleeds through into every element of its execution, building a cast that feels like a family across three tumultuous seasons. Symphogear’s stars have already shot lasers into the moon, sent islands floating into the stratos, and literally broken the sky. I can’t wait to see what happens next.