Yoshitoshi ABe and the Birth of Haibane Renmei [Part 2] 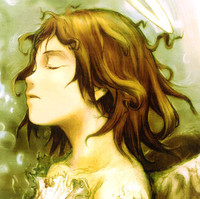 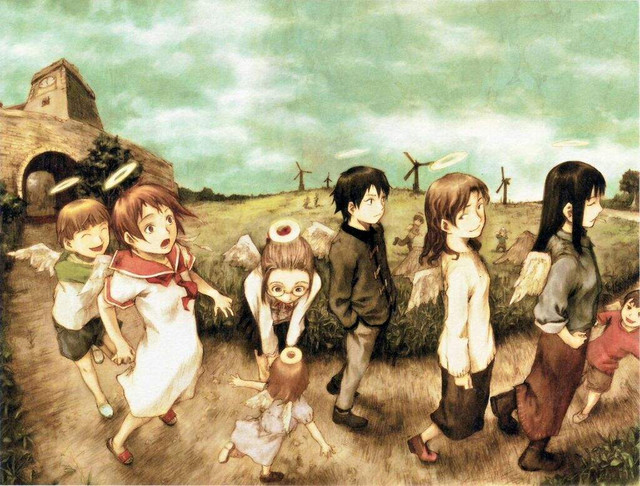 Last time, I covered the inception of Haibane Renmei as a doujinshi by Yoshitoshi ABe. This week, I’ll be covering the transformation of ABe’s original work into a full-fledged TV anime series. If you haven’t already, I’d suggest reading Part 1 of this feature before jumping into this one.

Haibane Renmei is one of the newest titles added to Crunchyroll’s catalogue of anime. Straight from the brilliant mind of famed character and graphic artist, Yoshitoshi ABe, the anime’s setting is every bit as beautiful as it is mystifying. Set in a unique rendition of purgatory, the story follows a group of angels called Haibane. With no memory of their past lives or reason for existing, the Haibane are born into the town of Gile, a seemingly peaceful world free from strife and conflict. Surrounded by the comfort of towering walls, they live quietly, working at their assigned jobs and relaxing with their friends. However, beneath the surface lies many secrets, locked away behind the walls and by the world’s elders. Told from the perspective of a newly-born Haibane, a young girl named Rakka, Haibane Renmei is a spiritual and introspective journey unlike any other.

Though it may not be apparent to viewers at first glance, Haibane Renmei was one of the earliest examples of the iyashikei (or “healing”) genre in anime. Whether intentional or not, it established the tone and pace that many popular slice-of-life anime would later adopt. However, what separated Haibane Renmei from other entries in the genre was that it took place in an extraordinary setting, as opposed to a contemporary Japanese one. ABe, who served as the series’ primary scenario writer, built upon the world that he created in his original doujinshi to deliver an imaginative experience for viewers. However, as Haibane Renmei was his first experience as a scenario writer, he considered it a very difficult one. 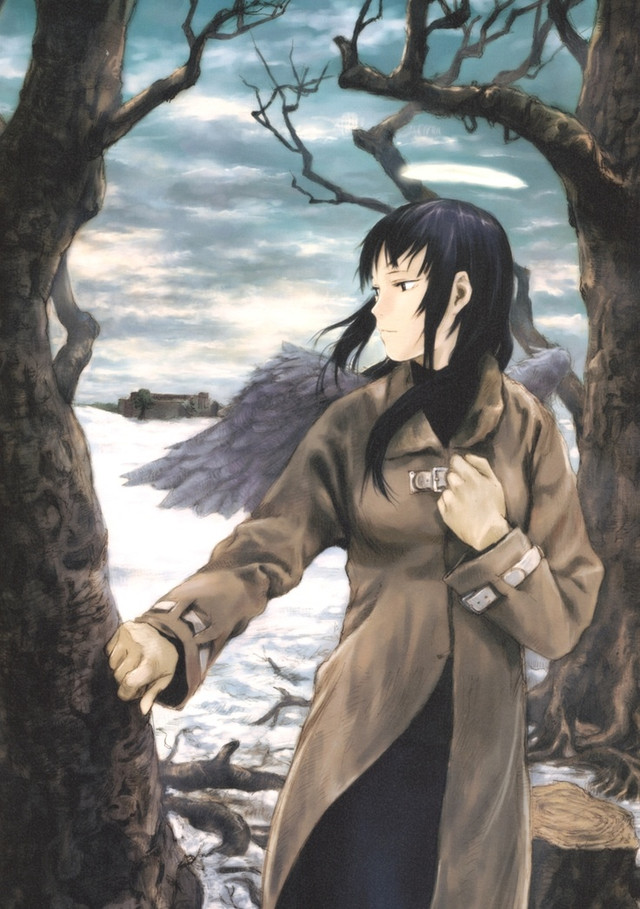 ABe’s original doujinshi did not have the material to fill a 1-cour anime nor was it exactly mass-marketable. Additionally, his work was more conceptual in nature, exploring the birth of the Haibane from their cocoons and the idea of a purgatory-like setting with recognizable Christian aesthetics. However, when producer Yasuyuki Ueda presented the prospect of a full-length TV anime, he was forced to expand upon his original scenario and create an engaging narrative that viewers could follow each week. As ABe admitted in an interview, this was not an easy task as weekly scenarios had to be produced for the anime as it aired. Having created original works and characters before, ABe was confident that he could write a scenario for a TV anime, but not necessarily deliver it within such a short amount of time. Thankfully, he was able to rely on Ueda for guidance, allowing him to solidify the anime’s composition and themes from start to finish.

ABe’s greatest fear with the production was that he felt that the first half of Haibane Renmei wouldn’t be interesting enough for viewers. As Haibane Renmei originally aired in 2002, at a time where slice-of-life anime had not been widely popularized, he felt the lack of narrative hooks would be a detriment to its success. On the other hand, Ueda was convinced that when the story reached its second half, the character drama would be enough to pull it through. However, he also expressed concern about the anime’s first half not being engaging enough.

Ultimately, both creators’ fears were put to rest, as Haibane Renmei was overall a well-received anime with a legacy that still lives on to this day. ABe’s decision to devote a large portion of the anime’s 13-episode run to exploring the setting of Gile payed off, as the locale had just the right amount of mystique to keep viewers intrigued. Additionally, ABe chose a subtle color scheme for the anime comprised of blue, green, gray, and brown tones that produced a stunning effect. The end result was an image of a quaint, European-style town with rolling hills, wind generators, and a distinct otherworldly flair. Even in spite of some of RADIX’s inexperienced digital processing and (now) outdated CGI, Haibane Renmei still holds up surprisingly well visually. ABe’s strength as a character designer, illustrator, and conceptualist, were all able to elevate the anime above its production limitations. 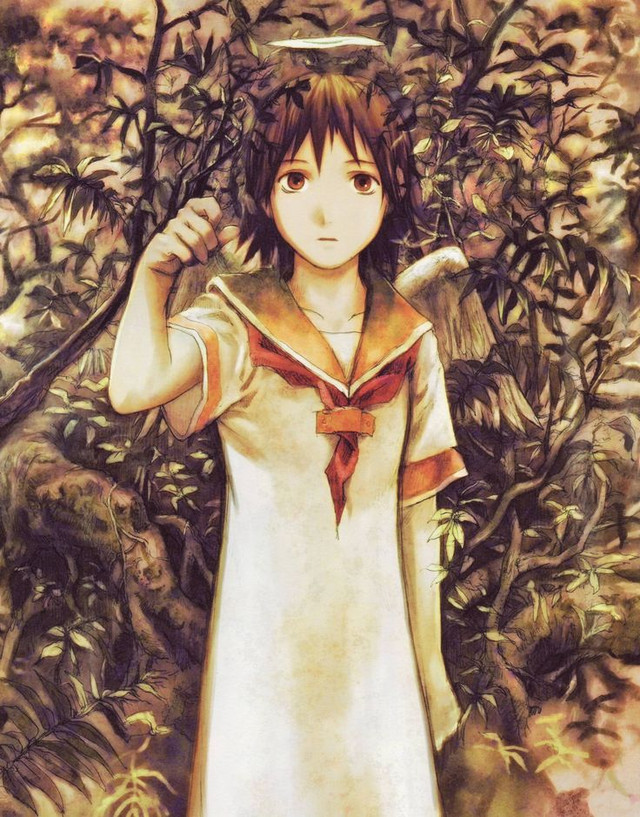 However, what many fans consider the greatest strength of Haibane Renmei was its nuanced approach to world-building and strong characterization. Paced in a way that many slice-of-life anime today are, the early episodes of Haibane Renmei followed the heroine Rakka and the other Haibane going about their daily lives. Driven by the cast’s dialogue and their unique personalities, the series effortlessly drew viewers into its world.

In Haibane Renmei, Rakka served as the primary viewpoint character. Kind, a tad naïve, but pure at heart, she had the qualities of a heroine who viewers could easily emphasize with. At the start of the series, Rakka is born into the town of Gile from a cocoon and soon begins to develop wings from her back. Comparable to a newborn infant, she experiences pain, confusion, and excitement all within her first few hours of life. With no knowledge of how or why she ended up in this foreign world, Rakka is as clueless as we are at the start of the anime; she’s essentially our lens into this soothing but strange walled town. Through her experiences, we learn important details about the world around her such as its rules, customs, and even forbidden practices. Rakka starts out as a blank slate, but she grows as an individual over the course of the series, developing her own opinions about how Gile is governed and even disobeying orders.

While Haibane Renmei begins as a slow-paced slice-of-life series, it gradually develops into a solemn character drama with heavy symbolic elements. Some Haibane are selected by an unknown force to depart from town of Gile, losing their halos and moving to the world beyond the wall. Whether this is to be interpreted as their death, reincarnation, or simply a removal of their existence, is all up to the viewer. Some of the other Haibane believe that this “day of flight” is a joyous moment, and a positive reflection of their good deeds and behavior while in Gile. However, some Haibane are deemed as “sin-bound”, as evidenced by the black stains on their wings, and are not able to achieve their day of flight until they are cleansed. Sin, guilt, and redemption, are all poignant themes that define the latter half of Haibane Renmei, as well as its beautiful climax. Although the anime doesn’t present concrete explanations regarding its supernatural phenomena, that is its beauty. ABe has stated before that he encourages his fans to reach their own conclusions, and find personal meaning (whatever that may be) within his work.

As a creator, Yoshitoshi ABe is a man who has given us some of the most imaginative and thought-provoking stories in anime. Haibane Renmei is no exception, and it’s perhaps the most accessible entry in his portfolio for a new viewer. However, it is every bit as complex as his other works and deserves a watch (if not multiple rewatches to digest all of its subtle details). If you’re interested in checking out this fantastic anime, then you’ll want to watch it on Crunchyroll today! 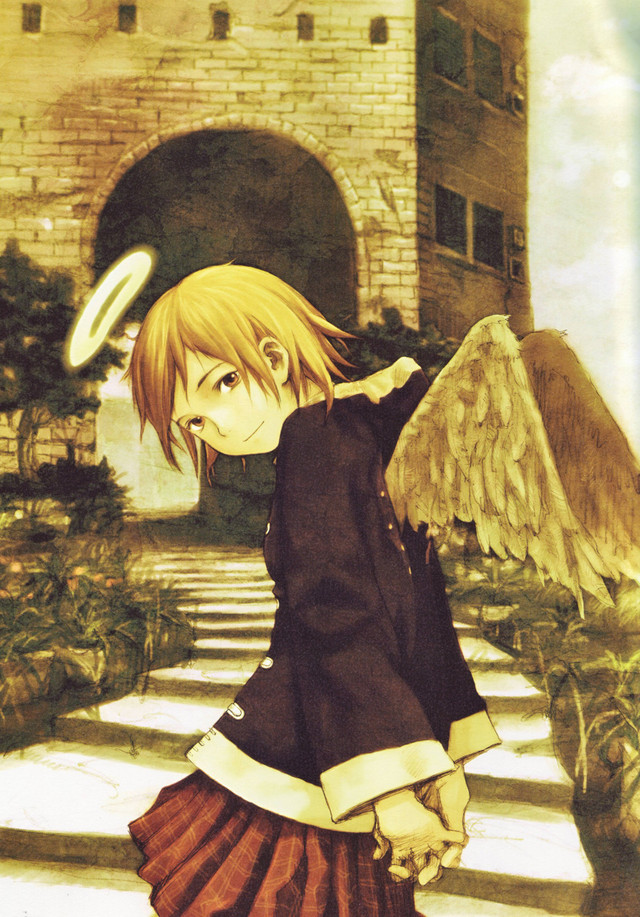