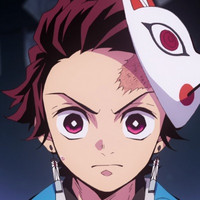 Hello all, and welcome back to Why It Works! The spring season has a wide variety of compelling new anime to watch, but as far as action goes, I’ve been greatly enjoying the shonen theatrics of Demon Slayer. The show has been barreling through Tanjiro’s training and demon slaying evaluation at breakneck pace, but has still found time for at least one major fight every episode. Those fights have demonstrated not just the fundamental appeal of Demon Slayer’s narrative, but also the excellent work studio ufotable are doing in bringing those battles to life. Having developed a unique style of conveying action through their long tenure on various Fate-related properties, it’s been thrilling to see their style applied to something totally different. So what does make ufotable action tic? 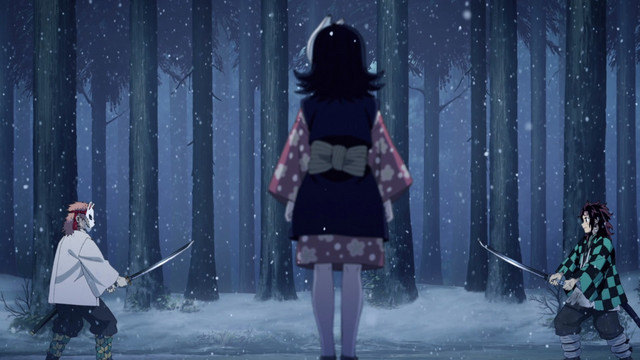 In a word, CG. Computer-generated animation often gets a bad rap in anime circles, and for good reason. CG characters often feel far more stilted than their traditionally animated counterparts, and if a show is only partially CG, those elements tend to stick out and feel out of place within their environment. But ufotable rarely use actual CG character models - their figures are traditionally animated, though heavily embellished with post-processing effects. What ufotable’s CG does accomplish is give their battles a clear sense of geography - a physical space.

Whether in battle or not, a sense of physical space is very important in Demon Slayer. It is somewhat unique among shonen properties in that the treacherous nature of Tanjiro’s natural environment is consistently one of his most dangerous foes. Both his training and his evaluation have in part centered on being tossed into a hostile natural environment and asked to survive, while the first episode banked heavily on the oppressive snowfall around his home. 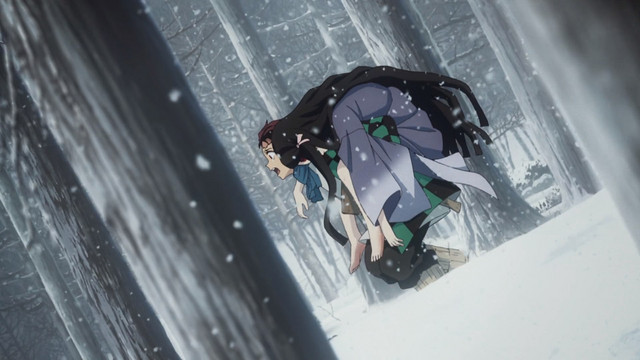 Just check out this sequence, which demonstrates both the ever-present threat of nature and the way ufotable use CG to convey that threat. Having a camera pan forward along with a character’s steps in traditional animation would be nearly impossible. Because your angle of perspective relative to the background would be consistently shifting, you’d have to redraw the entire picture, not just the active characters, for every single push of the camera. By instead creating a CG track for Tanjiro to follow, the show is able to viscerally convey the sensation of laboriously trudging through snow, with the shakiness of the camera simultaneously conveying Tanjiro’s exhaustion and also masking the CG.

In general, using CG backgrounds allows for far more active camerawork. You can spin towards or around a CG object without breaking the illusion of reality - for traditional animation, every shift in perspective necessitates a redrawing of every object visible within that perspective. Ufotable’s embracing of CG backgrounds thus allows for energetic tricks like this one, where the rush and spin of the camera emphasizes both Tanjiro’s panic and his oncoming attacker. The first episode culminates in a brilliant fusion of traditional animation and CG backgrounds, as the flexibility of the art design allows the camera to follow Tanjiro all the way through his desperate charge. 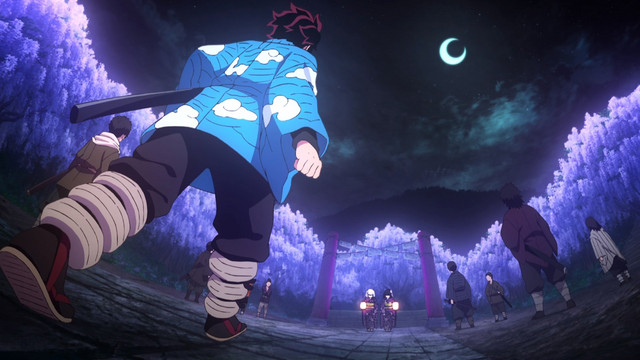 The ultimate effect of these CG backgrounds is not just exciting, flexible camerawork, but also a clear sense of physical space and impact throughout Demon Slayer's fights. Battles always take place within a specific, deliberately illustrated arena, an arena which can always been drawn into the active fight through attacks like this. And this instinct isn’t just reflected in Demon Slayer’s clearly CG-embellished fights. As you can see in this more recent battle, the action is always shot so as to convey visual clarity - you consistently see Tanjiro’s full stance and positioning relative to his opponent, and the one distant shot is intended to emphasize how both characters are still surrounded by a deeper wood. Through the clarity of its staging, Demon Slayer is able to avoid spelling out the tactical mechanics of its fights in dialogue - instead, the stage itself offers all the hints we need.

At its best, this style of staging can integrate with the show’s strong sound design and art direction to create an incredibly visceral, immediate feeling of truly being there. The brisk chill of the mountains, the dark whispers of the forest, and the panicked ring of metal as your blade repels some sudden strike. Demon Slayer's visual strengths have made even the show’s training battles exciting, and I can’t wait to see how they dazzle us next!

Let me know all your own favorite parts of Demon Slayer in the comments!