Today let's break down some of the many visual wonders of the first episode of Fire Force!

Hey all, and welcome back to Why It Works. I’m currently deeply buried under the deluge of new summer anime, due to an ill-considered oath I once made to always watch every new premiere, but even my anime overdose delirium couldn’t keep me from appreciating the stunning brilliance of Fire Force’s first episode. Directed by Yuki Yase (episode director on Madoka Magica and Monogatari, and director of Mekakucity Actors) and based on a manga by Atsushi Okubo (creator of Soul Eater), Fire Force doesn’t just clearly convey the talents of its staff - it elevates them into something truly awe-inducing, a gorgeous and thrilling celebration of animation and visual storytelling. Today on Why It Works, let’s break down just a few of the highlights of this stunning premiere! 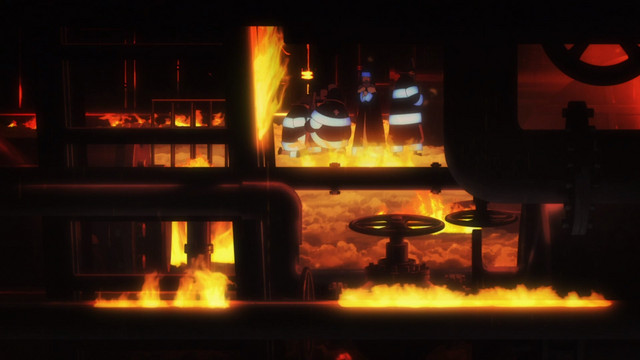 Yuki Yase is clearly a director with a singular voice, but many of the layouts of Fire Force’s premiere seem reminiscent of the stylistic flourishes he likely internalized working on SHAFT productions, which generally all take care to adhere to a general visual formula. That formula includes incidental shots which aren’t framed simply to capture the focus characters, but to expand to include the broader geometry of their environment, making a visual maze out of foreground details and background lighting. The early scenes of protagonist Shinra’s introduction to his team are lent a sense of mystery and grandeur through their detailed layouts, and the later fight scenes naturally convey the bedlam and disorientation of a building on fire through similar tricks. Fire Force’s layouts greatly enhance its visual drama, and I hope they continue to maintain such a high level of creativity and beauty.

At one point in Fire Force’s premiere, one of Shinra’s teammates informs him that the blue visual bands of their uniforms form an unbreakable link between them, protecting them from the horror of their fiery enemies. That line isn’t just a reflection of his support for Shinra - it’s essentially an explanation for the visual terms of the show’s drama, as the screen erupts in flames countered and bound by those glowing, vivid blue bands. It’d be easy to get visually lost in the speed and overwhelming orange glow of Fire Force’s battles, but the contrast of those blue bands against the fire both help to maintain visual clarity, and also emphasize the show’s thematic focus on teamwork and mutual trust as the only bulwark against the flames. 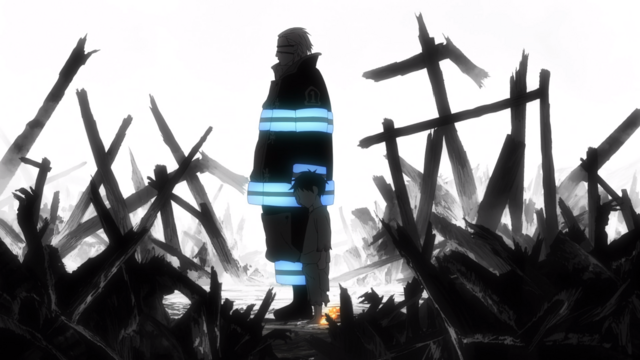 The Beautiful Minimalism of Its Flashbacks

Shinra’s memories of his mother slot into two distinct visual categories: the warm, colorful palettes of his happy childhood, and the brutal black-and-white minimalism of her traumatic death. While the modern world is portrayed through somewhat muted colors, the contrast between these two flashback styles emphasizes how his mother’s death drained all color from Shinra’s world, reducing his existence to barren grayscale, with only the orange of flames and the red of his “devilish” eyes still offering color in the grey. This creates distinct, beautiful moments, but also directly informs the show’s emotional and thematic intent.

The Wild Diversity of Visual Digressions

Yuki Yase’s time at SHAFT saw him consistently dabbling in unique visual styles that diverged heavily from the standard aesthetic of his shows, like the witch worlds of Madoka Magica and sprawling illustrated scrolls of Monogatari. In Fire Force, that fondness for visual experimentation is expressed in a variety of ways, like the stained glass windows used to illustrate the history of the Infernals, and the roughly animated, beautifully colored depictions of their ever-shifting nature. Even the show’s brief gags are often conveyed through distinct and attractive new visual styles, making for an episode that looks as if it’s constantly reinventing itself, embracing any visual tools that will further its dramatic goals. 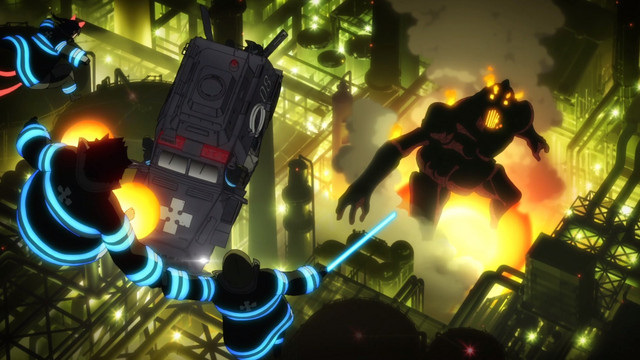 And of course, beyond all of the show’s excellent directorial and design choices, there are the plentiful, utterly beautiful cuts of action and fire animation. Animating something as fluid and detailed as fire is an inherently difficult prospect, but Fire Force is utterly brimming with cuts that demonstrate the terrifying majesty of an out-of-control fire, or the physical weight and staggering momentum of its heroes’ powers. Sequences like Shinra’s big introduction, or his team’s encounter with an out-of-control infernal, don’t just look beautiful - the clear flow of character movement always conveys a strong sense of every object’s sturdy physical form, while the convincingly illustrated flames around them make it seem like they’re skating on the surface of a lake of fire. Fire Force’s debut was a visual marvel from start to finish, and I dearly hope the show continues to dazzle us with such purposeful, beautiful, and thrilling spectacles.

What did you all like best about Fire Force’s debut? Let us know in the comments!